People often underestimate the impact of ambient light. The rise of smart lighting has opened up a world of glowing colors that can reflect moods, set a tone, and enhance our entertainment. Nanoleaf has been a pioneer in this space with its eye-catching modular light panels, but its latest Lines series might just be its best yet.

With a stunning backlit effect, Nanoleaf has distilled what makes its smart lighting compelling and dropped unnecessary fripperies like touch controls. Lines are still overpriced and unabashedly futuristic, but they can enhance the right room.

Setting up Nanoleaf lights is not fun. First, you have the quandary of how to arrange them. The Lines come with hexagonal fixings that stick to the wall with paint-lifting adhesive, and the 11-inch light bars clip into them in whatever pattern you want. One of the hexagons has a 15-foot power cord and control unit, so you must think carefully about where to put it. 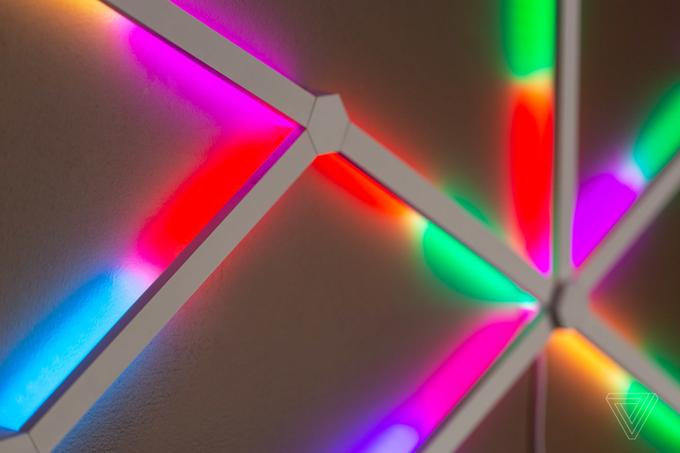 As with Nanoleaf’s panels, the best approach is to lay them all out connected on the floor or on a big table and play around with them until you hit the design you like best. (Nanoleaf provides some suggestions.) Be slow and methodical about sticking the hexagons to the wall, and make sure you have them oriented correctly.

Connecting your lights to your Wi-Fi is the next problem. Using the Nanoleaf app to scan the QR code on the power adapter is straightforward, but you must make sure your phone is connected to the 2.4-GHz band of your Wi-Fi network, not the 5-GHz band. The potential issue is that some modern mesh systems and routers (such as Google’s Nest Wi-Fi) don’t allow you to split the 2.4-GHz and 5-GHz bands. It’s the sort of thing that can make smart-home setup a pain.

The good news is, once everything is set up, the Nanoleaf Lines work smoothly. They are more responsive than my Nanoleaf Shapes or the company's original light panels, and I have yet to suffer a mystery disconnection, which I've encountered with previous models.

Nanoleaf's Lines splash colored light onto the wall behind them and work beautifully as ambient lighting, but not as the main light source. Each bar can put out 20 lumens, so the nine-bar starter kit is 180 lumens total (for comparison a regular light bulb puts out anywhere from 300 to more than 1,000 lumens). Bars can display two different colors simultaneously, and can smoothly merge from one into the other.

With support for millions of colors and lots of animated scenes, the Nanoleaf Lines can nail whatever vibe you crave. They are at their most mesmerizing in a dark room cycling through colors, but they are quite versatile. I use the daylight effect to brighten my office during the day and ward off the dark winter outside, then switch to flowing animated colors at night.