Keeping hands clean during cold and flu season is a key defense against both. By now, we all know about the "20-second rule" but how many of us are actually sticking to it some 18 months after the start of the pandemic? Amazon's Automatic Smart Soap Dispenser -- with a built-in timer and Alexa integration to make those 20 seconds more fun -- is designed to keep your handwashing habits up to snuff.

Besides getting a good scrub in, an automatic soap dispenser means one fewer point of contact in those high-traffic germ zones. I took one for a test run to see if it's worth the $54 price. The Amazon dispenser proved to have a bit of a finicky setup but eventually played my custom music and routines. Plus, the most important features -- soap dispensing, charging and the default 20-second timer lights -- worked well and without issue. There are cheaper options for automatic soap dispensers, but I really like the way this one looks and it has some fun features for a traditionally boring piece of bathroom hardware.

What is it and how does it work?

The Amazon Smart Soap Dispenser is a touch-free, rechargeable soap dispenser designed to reduce the spread of germs and keep you (and the family) honest about the CDC-recommended 20-second wash time. 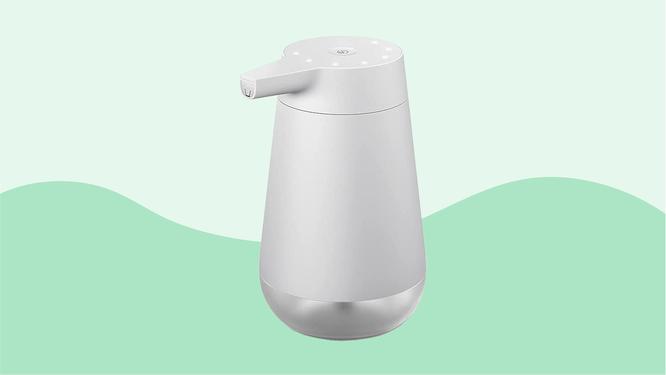 The sleek-looking container holds 12 ounces of liquid soap. Once you fill the base and charge the dispenser via a standard USB charging port, it will spurt out droplets of soap in three amounts when it detects motion under the spout. It determines the amount of soap to dispense by how far your hand is from the nozzle -- the further away your hand is, the more soap you'll get.

A 20-second timer to keep you honest and custom prompts

After the soap dribbles out, several LED lights on top of the dispenser begin to count down 20 seconds, which is the same amount of time the CDC recommends we all scrub to best remove disease-spreading germs and bacteria.

If you want a musical countdown, the dispenser will pair with Alexa devices including Echo Dot and Echo Show so you can program 20 seconds of tunes. I'll admit, 20 random seconds of music isn't something I'm interested in, but for folks with young kids, I can see how this would be a fun and interactive way to build a good hand hygiene routine. You can default to an Amazon Music playlist (even if you're not a subscriber) or pair with Spotify or another streaming service to customize.

You can also add about 14 other types of custom prompts to the routine like quick traffic, weather or stock market updates. Alexa will remind you of the important events on your calendar that day or run through the morning's headline news as soon as the soap hits your fingers. You can suppress the routine too so it only plays once a day and not every time you wash.

Fussy Alexa connectivity. Not a dealbreaker, but worth noting.

While the most important functions of this dispenser worked well and right away, including a clean dispensing of soap and a clever 20-second silent timer, the Alexa integration took two tries to set up. I was able to successfully "pair" the Smart Soap Dispenser to my Echo Dot initially (or so it seemed) and create routines within the Alexa app, but the 20 seconds of music wouldn't play. I had to uninstall the soap dispenser, recharge it to full and re-pair it with my Echo via the Alexa app. This time it worked and my musical timer kicked in whenever the soap dispenser sensed motion.

One thing that's worth mentioning, especially if you're jazzed about the music integration, is you'll need an actual Echo device in or near the bathroom or it won't do you much good. I would expect most folks don't have one there so it may mean springing for another one if you want tunes or news updates while you wash.

Has a sturdy build and good battery life

I like the way the Amazon dispenser looks and it has a nice weighty build so it won't topple over easily. As of now, it's only available in this off-white color. Of the few most popular automatic dispensers on Amazon, I personally like the look of this one best. I imagine anything made of metal would get very smudgy.

The battery should be good for a few months on one charge and it only takes about 10 minutes to charge back to full. If you were to lose the cord, any standard USB plug will do the trick.

You need to charge the soap dispenser fully (light showing green) in order to pair it with an Echo device. Also, don't fill it up with soap until you've got it completely set up, paired it and placed in the spot that you want it, otherwise you'll end up drops getting soap everywhere since the trigger is rather sensitive. Speaking of which, you'll want to station this somewhere that you won't constantly be jostling or accidentally running your hand under it or you'll have a regular pile of unused soap on your countertop. Otherwise, the dispenser stays pretty clean. It just may need a wipe where the soap is released every so often.

See at Amazon
Prev Next