Although there’s still more than a month before Diamonds Day and the Group Two Nevele R/Macca Lodge Southern Oaks Final, Joes Rock has put her hand up as the filly to beat in the $50,000 harness racing final at Ascot Park.

The Brett Gray trained three year old was super impressive when she came off the speed to beat seven rivals in the sixth heat of the series at Wyndham today.

“I always knew the ability was there. She just needed a bit of ironing out and a bit of ringcraft, but racing is bringing her on,” said winning driver Blair Orange after Joes Rock won her third race from ten starts.

From a wide draw Orange settled Joes Rock back in the field after Feelthejoy took up the role of pacemaker.

The filly was five lengths off Feelthejoy when the field turned for home. But once Orange released the ear plugs Joes Rock let down with an amazing burst of speed to hit the front twenty metres from the line, beating Dannemora by three quarters of a length.

“They ran hard early then backed it off. It was her speed that got her home. She’s a wee trick to sit behind but the ability is there. She just needs to grow up mentally. She just runs round a lot, but has speed and she can tough it out a bit.” 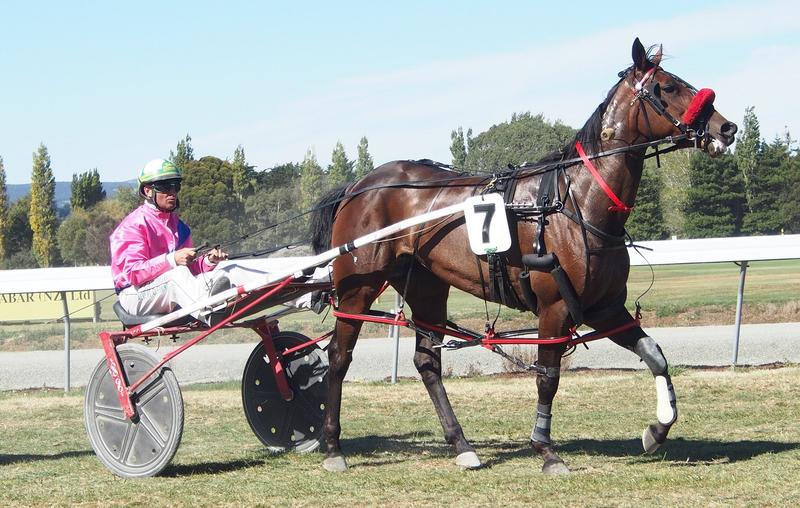 Joes Rock down the outside for Blair Orange

Orange thinks Joes Rock can also race competitively outside of the province. “The speed will take her a long way, but she just needs to get there mentally first.”

Her winning time of 1-53.5 was just .2 of a second off Watch Me Now’s three year old fillies track record.

Back to the birdcage

Joes Rock is owned by Robert and Sharyn Symon.

Meanwhile the Young Quinn Raceway and Southland record was broken by smart mare Darling Me, when she won the third heat of the Southern Belle Speed Series. Her time of 1-51.8 was the fastest ever recorded in the province for a mile, bettering Delightful Memphis’s previous record of 1-51.9 posted at Winton in March 2017. Kiwi On Show (1-52.2) previously held the Young Quinn Raceway record for the distance.

Darling Me heading to the swab box after a hot run