Since its inception in 2009 as a provider of all-flash systems, Pure Storage has carefully put together a portfolio that has many of the storage bases in the datacenter covered. Its FlashArray//C appliances take aim at the capacity needs of enterprises while the FlashArray//X systems are designed to address the performance needs of latency-sensitive workloads. FlashBlades offer high capacity object storage.

The company even offers an as-a-service, pay-as-you-go model with its Evergreen Storge subscriptions and over the past few years has made a push into the cloud, including with Cloud Block Store cloud-based software-defined storage offering. It partners with Microsoft to run EDA applications on the Azure cloud of FlashArray systems and, as we noted earlier this month, apparently has made its first significant deal to one of the top 10 hyperscalers, though right now it’s unclear which of the hyperscalers it was.

Despite all that, there was still a hole in the portfolio at the high end for the most mission-critical applications, a hole that enterprises had to fill with such products as Dell EMC’s VMAX or PowerMax systems or appliances from the likes of Western Digital and Hitachi Vantara.

“We started with enterprise-grade flash products, but mostly we were selling into upper mid-market type of businesses when we first started the company,” Dan Kogan, vice president of product and marketing at Pure, tells The Next Platform. “That makes sense as a new storage startup. It’s tough to displace enterprise incumbents and [there are] lots of features to build and whatnot. As that platform has grown out, our business more and more is increasingly coming from the larger accounts in the enterprise, and we’ve moved in two directions with the platform.”

The FlashArray//C appliances took aim at Tier 2 applications and secondary workloads, hitting on scenarios around data protection and backup and recovery for organizations that still are being served by hybrids and spinning disks, Kogan says. The FlashArray//X systems were for higher-end workloads, with the X90 being the top performance appliance.

Pure this week made a move to plug that upper level and challenge Dell EMC and other vendors in the top tier of the storage market, where enterprises are running huge databases like SAP HANA, Micrsosoft SQL Server or Oracle, or containerized or cloud-native applications. In addition, the FlashArray//XL family of systems – currently the XL130 and XL170 – are designed to give organizations the cloud-like scale and – through the Evergreen Storage program – flexibility in their on-premises datacenters.

The ambition to bring a cloud environment into the datacenter dovetails with the vendor’s Pure Fusion initiative, unveiled in September as a self-service and autonomous storage platform that the company said combines enterprise storage with the agility and scalability of the cloud. The platform includes a software-as-a-service (SaaS) management feature that pools storage arrays into availability zone and drives automation into such tasks as workload placements and mobility and fleet balancing. An API framework brings a storage-as-code model that work with modern developer tools. 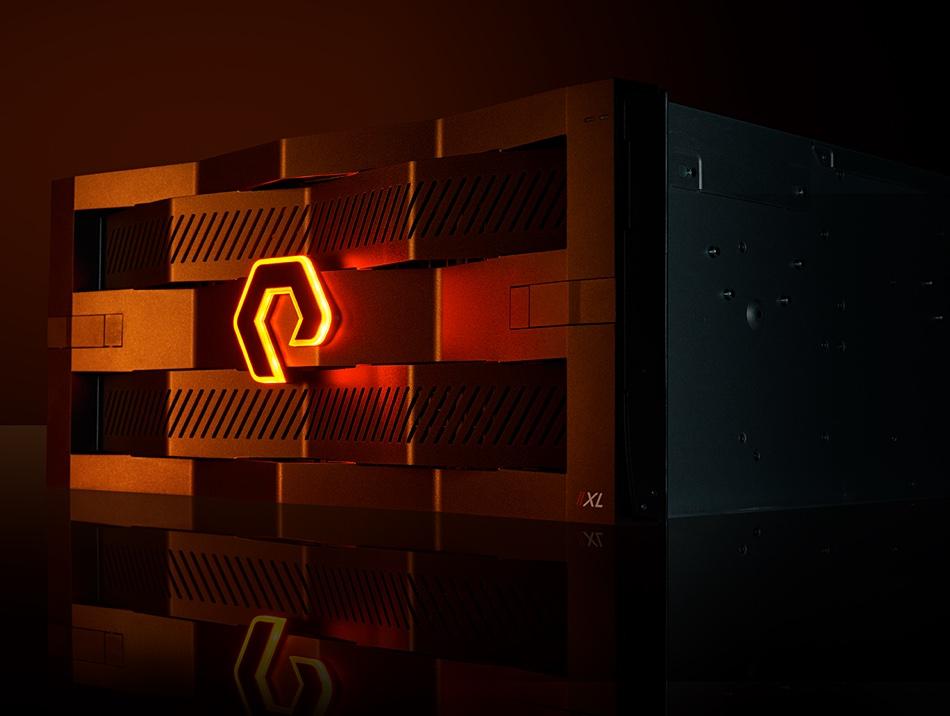 “In the world of Fusion, the model of the storage array is invisible and largely irrelevant to the application developer,” Kogan says. “Our customers, the people who buy Pure Storage and work with the storage arrays, are the IT providers. Their end customers internally – the lines of business, the application teams they support – honestly don’t care much about the storage array. They care about meeting their performance requirements and SLAs for their application. They expect the storage team to deliver that. Fusion gets them out of that world of where they are working project by project trying to find the right array for it and giving those people a self-service catalog based on different policies and requirements that they published out.”

Adding the FlashArray//XL line to the mix enables the storage teams to build a higher tier of storage, even if the people using the application don’t necessarily see it, he adds.

“When you have someone building something with a ton of transactions and high data capacity requirements, potentially unpredictable bursts of workloads or spikes, that’s the kind of thing you’re going to want to put XL behind,” Kogan says. “Now there really isn’t a use case that can’t be met with that storage portfolio, from test-dev scenarios, secondary scenarios, even working on the cloud – Cloud Block Store – to the FlashArray//C lineup for the secondary ones, the FlashArray//X covering the vast majority of your database and VMware workloads to XL for those really high-performance applications or just multiple consolidation projects. Every option is now available to the IT to serve up to their end users.”

The ability to scale to the point where it rivals what enterprises can get from the cloud is important for such organizations as massive global banks and similarly large institutions, which can’t or won’t move their entire businesses to the cloud for cost or security and compliance reasons but still want an on-premises cloud-like experience, he says.

“Going all-in on the cloud is never an option for some of these [larger] customers,” Kogan says. “It’s never a reality, so if you’re going to build out a datacenter that rivals a scale that you get from an AWS [Amazon Web Services] or Azure or GCP [Google Cloud Platform], that’s a very, very capital-intensive, high-cost item,” Kogan says. “Being able to blow this up with highly dense, highly efficient storage has a pretty marked impact on their overall TCO and bottom line. It’s another key piece of the equation.”

According to Pure, the FlashArray//XL appliances deliver almost an 80 percent improvement in IOPS over the FlashArray//X systems, along with as much as 5.78 petabytes of effective capacity, latency as low as 150 microseconds and throughput that can reach 36 Gb/s. The company also is claiming a 20 percent improvement in density and an average reduction of data of 5:1.

The company says it already is seeing demand for the FlashArray//XL systems. They’re available now, but as customers heard about the appliances during executive briefings, sales calls and similar meetings in November, pre-release orders began coming in.