All the best features, news, tips and great deals to help you live a better life through technology

Thank you for signing up to T3. You will receive a verification email shortly.

There was a problem. Please refresh the page and try again.

Philips Hue, despite significant competition, continues to lead the way in smart lightingIt's not just a case of technology – though parent company Signify clearly has a handle on that, with significant improvements happening in recent years – but of design, too: one look at our guide to the best Philips Hue outdoor lights should be a pretty big convincer that these are going to look awesome in your outdoor space, just as much as the way Hue's indoor lights dominate our list of the best smart bulbs.

Two key options in the Philips Hue outdoor lighting canon are the Lily and the Appear, both multi-coloured spotlights which add not just light but serious atmosphere, designed to spread light out over individual aspects of your garden and walls to really make things pop. But which is best? Would you be better off just getting both? Is there an even better option? Let's find out.

While both are happy on a wall, these are two lights for two different situations. The Appear is an IP44 rated wall light, while the Lily is a spotlight meant for double duty: it's great on a wall, but it can also be tracked around your borders and placed on the ground. We see no significant reason why you couldn't put the Hue Appear on the ground, although its light projection has been specifically designed to compliment a nice wall; the Lily's has a lot more flexibility in terms of positioning. The Appear is more a straight up and down type affair – but if you wanted to recreate its architectural lighting wash effect with a pair of Lilys, things would get ugly fast. 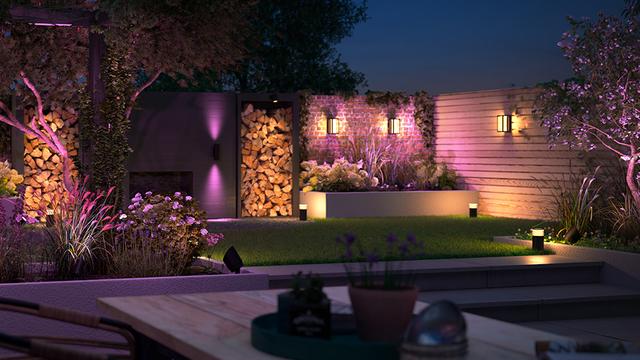 When shopping for a Hue Appear, bear in mind that there are two versions. The old one was rather fiddly to wire up, basically requiring you to awkwardly screw together a terminal block while holding the lamp at the same time; the newest Appear, in Stainless Steel, uses a far more sensible wall-based terminal block which connects to the lamp itself using contact terminals when hung.

Given that you'll be drilling holes and wiring directly into your lighting circuits it's a job perhaps best left for the professionals, but the newest version is at least more DIY-friendly.

The Hue Lily makes use of a low-voltage power system based on plug-in transformers, each of which can power a daisy-chained string of five Lily lamps, and you can also incorporate the path-washing Hue Calla light in that string if you like. Its bayonet-fit cables are entirely DIY which makes long cable runs straightforward, particularly if you pick up some extension cables, but does mean you'll need an outdoor outlet, or several if you want to go beyond five lamps – and the wiring connecting them all is much more difficult to hide.

Neither lamp uses a replaceable bulb (they both have a 25,000 hour maximum lifetime) and each outputs at 600 lumen, though the Appear's double-ended nature technically gives it twice that output. But the Lily has a trick up its sleeve in the form of the more expensive Lily XL, a larger spot with a 1,050 lumen bulb which should be enough to illuminate a good portion of a lawn.

The Lily XL does draw slightly more power than the standard version, meaning you're restricted to three on a string rather than five, and it is more suited to sitting on the ground than on a wall, but it's an option.

They each adhere to Hue's Colour and Ambience lighting standard, meaning they have access to 16 million colour shades and adjustable white temperature too. The real difference is one of looks: the Hue Appear's cone light wash is a fairly fixed (but entirely attractive) output, whereas the Lily can (depending on its angle) offer severe cones of light to your path or wall or slightly more subdued and ambient light if you don't mind wasting a few photons in the atmosphere.

Although Hue's newer indoor bulbs come equipped with a Bluetooth radio for individual control, that isn't the case with the outdoor range, where that would make a lot less sense. They're both reliant on long-range Zigbee communication with the Hue Bridge, so you'll absolutely need one of those or, if you're happy to put up with less detailed functionality, an equivalent smart hub such as the Amazon Echo 4th gen. Thankfully Zigbee's mesh system, which bounce signals between up to three nodes, means it will probably have the range to reach into your garden.

The Appear is likely to be physically attached to your house in some way – it's great for highlighting doorways or illuminating an outdoor porch – but there's the possibility you'll run your Lily strings a little further out. Just bear in mind that at least one of those lights will need to be close enough to the Bridge (or another Hue device) to pick up a signal.

Hue Lily vs Hue Appear: Which is best?

We'd certainly say the Hue Lily (and its fatter XL cousin) is the more flexible lamp of the two Hue Outdoor lights going head-to-head here. You can use it in so many ways, put it so many positions, and install it yourself without any worry.

But in terms of lighting impact the Appear probably has the edge – particularly if you're going to use it to light up a doorway. Don't overlook Hue's other lights, though: the Calla is perfect for path edging, and the Econic is superb on a post.