Philips Hue is now expanding its lineup of home theater smart home lighting accessories with the new Gradient Tube. As just the latest addition to its stable of individually-addressable lights, the new Gradient Tube lamp sports a design made for resting on center consoles, shelves, and more. Now available for purchase, all of the details are down below.

Last fall, Philips Hue brought its Gradient technology to a new Ambiance Lightstrip and is now looking to expand the use of its individually-addressable LEDs. We saw the debut of its Signe floor lamp with the feature set, and now that same design is being carried over to an even more unique form-factor.

The new Philips Hue Gradient Tube delivers all of the same mulitcolor lighting capabilites we’ve come to expect, just in a more compact design. Meant to sit underneath the TV on a home theater console, the lamps comes in two different form-factors depending on which size TV you’re looking to pair it with. Each one features an array of individually-addressable LEDs that can be rotated to either splash against the wall or up against the television itself. 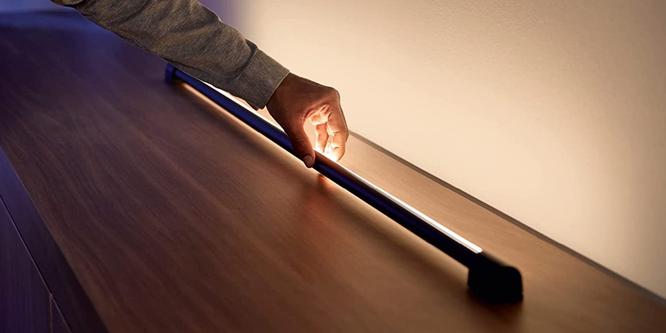 Aside from just the form-factor change, the real perk of this one is not having to adhere anything to the back of your TV. Just about all of the existing Philips Hue Gradient products meant for your home theater are designed in some form or another to hook onto the back of your television for immersive bias lighting.

Just like the recent Gradient Ambiance strip from last fall, this new addition arrives with two different ways to connect it into your smart home. There’s the traditional Zigbee connectivity which allows the Philips Hue Gradient Tube to pair with the Hue Bridge and Sync box, as well as Bluetooth. Though you will need to use the former of the standards in order to take advantage of the more novel adaptive lighting features as well as Siri, Alexa, and Assistant.

Bring the Philips Hue Gradient Tube to your setup

Now available for purchase, you can score the new Philips Hue Gradient Tube at Amazon as well as direct from the company’s online storefront. At the time of writing, only the compact version made for 40- to 55-inch TVs is available. The larger version on the other hand is slated to arrive sometime in early spring. Pricing is set at $199.99.

Over the past few months, Philips Hue has begun updating all corners of its lineup with new bulbs and today’s unveil finally gives us something entirely new. I really appreciate that the Gradient technology is being included in more and more of the new releases alongside Bluetooth.

Though as far as this one goes specifically, I am a big fan of how the Philips Hue Gradient Tube form-factor is. The biggest perk is definitely going to have the addressable RGB features in a new design that doesn’t require you to outfit an entire TV in adhesive-backed lightstrips. Sure it might not deliver as immersive of an effect, but I can see this being a nice solution for those who want a little bit of flair without the cash or time investment of a more capable setup.

FTC: 9to5Toys is reader supported, we may earn income on affiliate links