Pink Floyd Profundity: (from Dark Side of the Moon)

Grab that cash with both hands and make a stash

I’m alright, Jack, keep your hands off of my stack

Don’t give me that do goody good bullshit

Obviously, we are living in extremely troubling times. Just turn on the nightly news and take a good, long gander at what has become of the planet earth in the 21st century.

On one side of the world we are watching innocent civilians get blown to bits while taking refuge in schools, churches and hospitals —- by an insidious tyrant who has no regard for the sanctity of human life.

On the other sides of the tragedy in Ukraine, people are still trying to cope with the awful devastation of what continues to be the most lethal pandemic the world has seen in over a century.

Meanwhile, amidst all of the horror and chaos, the NFL’s free agency frenzy has provided fans and casual observers with a privileged glimpse of how far NFL teams are willing to go in order to acquire star quarterbacks and skill players.

For two long years the Aaron Rodgers saga in Green Bay has been headline news —- the brooding league MVP has been at odds with the way in which his Green Bay Packers conduct their business. And now that the salary cap has supposedly caught up with the Packers and their ability to continue to compete for Super Bowls, Aaron Rodgers was plotting his escape. That is until a $50M a year contract was slid under his nose.

If Rodgers’ true ambitionwas to cap off his stellar career with a Super Bowl win, then agreeing to a $50M a year contract when his team is so tight against the salary cap is unthinkable, right?

And now the greatest irony of all is that his “main man” WR DeVante Adams has left Rodgers standing at the altar in favor of being reunited with Derek Carr, Adams’ beloved college QB at Fresno St. To enable that transaction the Las Vegas Raiders were eager to trade their 1st round pick and another “primo” pick to the Packers and then promptly ink Adams to a 5 year $140M contract.

So now Rodgers is making his $50M a year in Green Bay without his “go-to guy.”

Then there are the sports agents like Erik Burkhardt who try to take full advantage of the news of any lucrative contract. Here is what he tweeted out in response to the Adams trade and the speculation that the Raiders should extend Derek Carr’s contract:

Wait, so you’re telling me teams w (already) paid QBs can also pay:Highest paid WR, 2 highly paid DEs, one of highest paid OTs, highly paid TE, well paid RBs… and then also still REUP QB as one of the highest paid?!It’s a CHOICE. A choice to TRY to win. Or not. #Commitment https://t.co/xmTPURqDle

As we know, Erik Burkhardt has made it his public mission this off-season to coerce the Cardinals into giving Kyler Murray a lucrative extension NOW or at least by the NFL draft, or the Cardinals will suffer the consequences.

I don’t know about you, but I do not respond favorably to desperate threats. These past few weeks have made me question Kyler Murray’s decision making even more than I already was. I will be so pissed off if the Cardinals cave in. The team, the coaches, the players and the fans need to see Kyler Murray do more to earn an extension that would put him near the top of the NFLs highest QB salaries. In light of the question marks, it only seems smart and proper. 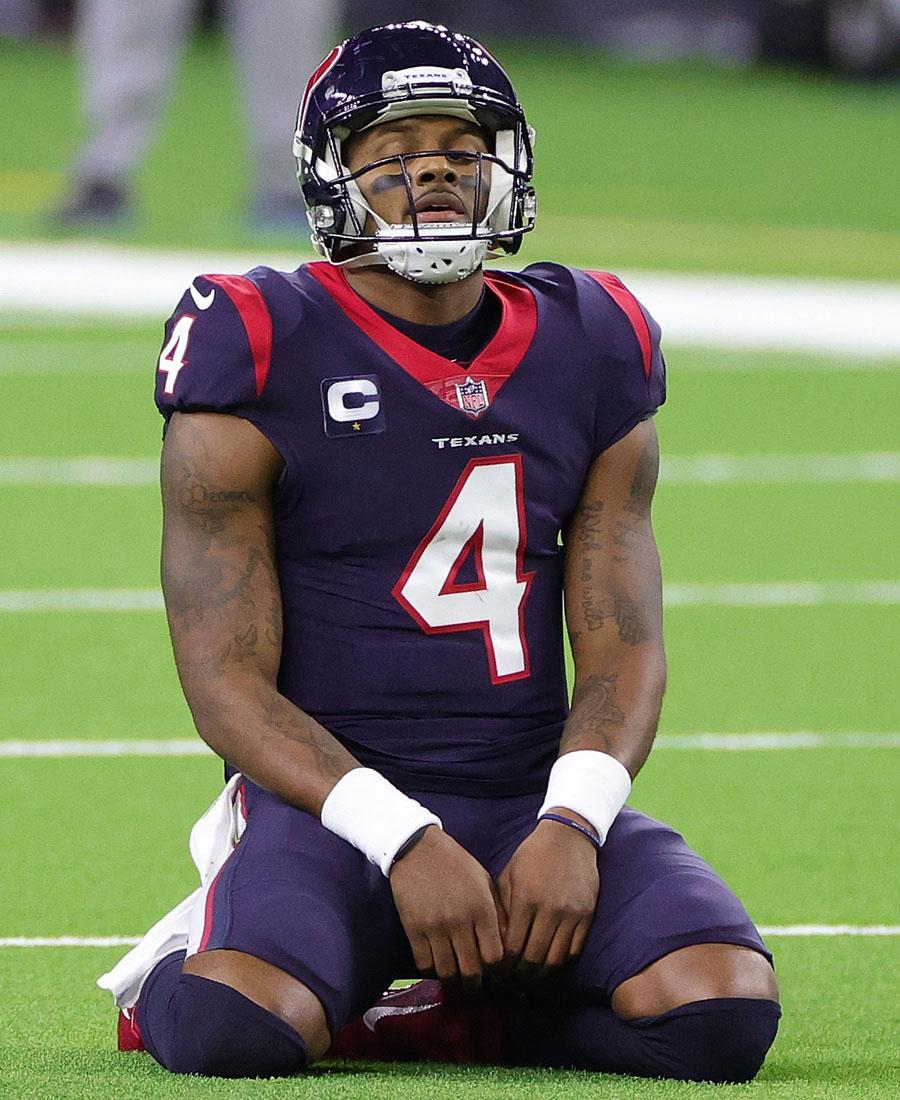 On the flip side, after Bruce Arians called Tom Brady’s retirement bluff by insisting that under no circumstances would the Bucs trade Brady, look who came crawling back to Tampa Bay. The Bucs, who were in “all-in” mode the past couple of seasons, are also up against the cap and have a number of new holes to fill.

Yet, how bizarre was it for Bill Belichick to bail out the Bucs’ offensive line predicament in light of Pro Bowl LG Ali Marpet’s sudden retirement by gift wrapping Pro Bowl G Shaq Mason to the Bucs for a mere 5th round pick?

Brady is now trying to recruit WR Julio Jones and other stars like himself who are willing to sacrifice the highest possible salaries in order to chase that diamond studded ring.

Because of Tom Brady’s willingness to take only as few slices of the salary cap pie as possible, the fact remains that no NFL QB has won the Super Bowl making more than $26.5M.

Yet, left and right, teams that are happy with their franchise QBs are throwing the huge bucks at them. Maybe one of these days a QB making between $45-$50M will win a Super Bowl, but until then, the fact remains that no QB has been able to hog up a fifth of the team’s salary cap and win the ring.

And speaking of the salary cap, what an utter joke that setup is. The fact that the New Orleans Saints whowent “all-in” for the last three years of Drew Brees’ contract were, as of February 28th, $43M over the 2022 cap now a mere three weeks later suddenly had the cap space to afford QB Deshaun Watson makes yet another mockery of the way in which the NFL salary cap was designed, supposedly to create an equal playing ground for all 32 teams. The whole compensatory pick formula is also an utter joke, as it has often led to the rich getting richer.

If the NFL wanted true parity, then the salary cap would have to be based on the players’ average salaries in real time. In that world, no star QB would be allowed to count only $1M against the cap for a season.

With yesterday’s trade where the Texans traded Deshaun Watson to the Browns for three 1st round picks plus 2nd and 3rd round picks that was facilitated by the Browns’ willingness (a) to ignore the fact that Deshaun Watson is a sexual predator who is facing 22 civil lawsuits involving the message therapists in three states that he abused and (b) to reward Watson with an unprecedented fully guaranteed $230M contract, with a $1M salary in year one so that if and when Watson is suspended he will only have to forfeit $55K a game —- the NFL has now stopped to a new egregious level of decadence.

For so many Browns’ fans who have been celebrating Women’s History Month, the news of the Watson trade has put them in a significantly and untenably compromising position. Here is one Brown’s fans “open letter” explanation as to why he is not in favor of the trade:

Anyone who supports women’s rights and is adamantly opposed to the sexual abuse of women is bound to feel conflicted by the Watson trade and how celebrated it has been by him and by hosts of others.

I called a good friend who is an avid Browns’ fan and asked him about his thoughts. He is dubious about the trade and feels that Baker Mayfield got a raw deal for making the sacrifices of having to try to play through painful injuries. Had Mayfield just sat out, he said, then he and the Browns wouldn’t be in this situation today. My friend said he will remain a Mayfield fan and may have to switch his allegiance over to Mayfield’s new team.

Imagine too what the last few days have been like for Falcons’ Pro Bowl QB Matt Ryan. From 2011-2020, Matt Ryan was the only NFL QB to throw for over 4,000 yards every season for 1an entire decade. He took the Falcons to their second Super Bowl in team history and came within a whisker of winning it. And yet, in comes Deshaun Watson for an interview and suddenly Matt Ryan finds himself the subject of trade discussions.

NFL Commissioner Roger Goodell always talks about “protecting the shield” of the NFL. He cited that mantra recently when issued a year’s suspension to Calvin Ridley for betting $1,500 on NFL games.

Goodell has maintained all along that “the league has been looking closely into the Deshaun Watson situation.” This comes at a time when Goodell and his staff have been passionately promoting the employment of women in the NFL in a diverse number of roles —- as GM candidates, as coaches and as referees.

Imagine this —- that Goodell, having given a full year suspension to Calvin Ridley for his betting brain fart —- what the backlash will be if Goodell suspends Watson for 4-6 games. What kind of a message would that send to the women working in the NFL and to women everywhere?

Fact is, no one is more protected by the NFL shield than Roger Goodell. His number one priority has always been to be the shield for the NFL’s billionaire owners. And for all of his efforts, the NFL pays him an annual salary of $63.9M. Fully guaranteed.

And, all the while, we measly fans are the ones paying for all of it.

This thread started with some Pink Floy’s lyrics and will end with some.

As for all that ails and plagues our planet, here is one of the keenest and most succinct perspectives I have ever heard or read:

With (with, with, with), without

And who’ll deny it’s what the fighting’s all about?