If you’re in the market for a Wi-Fi mesh system that uses the latest wireless technology to deliver blazing Wi-Fi throughout your home, look no further than Netgear's Orbi RBKE963 AXE11000. Designed for very large homes, this three-piece mesh system is loaded with top-shelf hardware, including Wi-Fi 6E circuitry that allows it to operate on the uncrowded 6GHz band. You'll also find rare 10Gbps WAN and 2.5Gbps LAN ports, and 12 high-performance internal antennas. It's easily the fastest mesh system we’ve reviewed to date, and its sky-high $1,499.99 price makes it the most expensive, too. Still, you can justify the cost if you need the Orbi RBKE963’s high-end specs, extreme coverage area, and speedy performance, which makes it an obvious pick for an Editors’ Choice award.

Wi-Fi for Your Chateau

The Orbi RBKE963 system comes with a router node and two satellite nodes, and it's rated to provide coverage for homes of up to 9,000 square feet. If your house is even larger than that, you can purchase additional nodes for $599.99 each.

The nodes share the same basic shape and style as the Orbi RBK852 system that we reviewed in 2020, but at 11 by 7.5 by 3.3 inches (HWD) each, they are a bit bigger. Each node contains 12 internal high-performance antennas. They sport a white finish with chrome trim, but if your home decor calls for it, you can order a Black Edition system instead. At more than the cost of each phone or laptop you'll likely be connecting to it, we expect the Orbi system to be at least as stylish-looking as those devices, and the color options help.

The nodes may look identical, but they’re not. The router node is equipped with a 10Gbps WAN port, a 2.5Gbps LAN port, three 1Gbps LAN ports, and a Reset button. As with earlier Orbi components, USB ports are nowhere to be found. There’s a Sync button around back for pairing the router to the satellite nodes. The front of the router has an LED indicator that glows solid green when the router is powered up and connected, solid amber when the router is restarting, and blinking red if the firmware has been corrupted.

The satellite nodes don’t have (or need) a 10Gbps WAN port, but they do have a 2.5Gbps LAN port, three 1Gbps LAN ports, a Reset button, and a Sync button. The LED indicator on each glows solid blue when the node is online and has a good connection to the router, solid amber when the connection is fair, and solid magenta when the node is not paired with the router. The satellites use one of the 5GHz bands for dedicated wireless backhaul, but you can use the 2.5Gbps port for a wired backhaul configuration to increase reliability instead.

The RBKE963 is powered by a 2.2GHz quad-core CPU, 1GB of RAM, and 512MB of flash memory. It’s a quad-band AX11000 system capable of data rates of up to 1,200Mbps on the 2.4GHz band, 2,400Mbps on each of the two 5GHz bands, and 4,800Mbps on the 6GHz band. It supports all of the latest Wi-Fi 6 tech including Orthogonal Frequency-Division Multiple-Access (OFDMA), 1024-QAM for signal modulation, 160MHz channel bandwidth, WPA3 encryption, direct-to-client signal transmissions (also known as beamforming), and MU-MIMO simultaneous data streaming.

Additionally, it employs Wi-Fi 6E technology to connect to clients using the 6GHz band. It’s important to note that although you can connect older devices to this mesh system, your client devices must support 6E to use the 6GHz band.

This Orbi system comes with Netgear’s Smart Parental controls, which let you create profiles for family members, manage online time for each member, and pause internet access. More robust controls that include age-based content filtering, internet time rewards, internet time limits, and detailed browse-history reports require a Premium subscription, which goes for $7.99 per month or $69.99 per year. (The system comes with a free 30-day trial period.) The Premium subscription also gets you the My Time app, which applies parental controls even when your child is on another network or using cellular data. 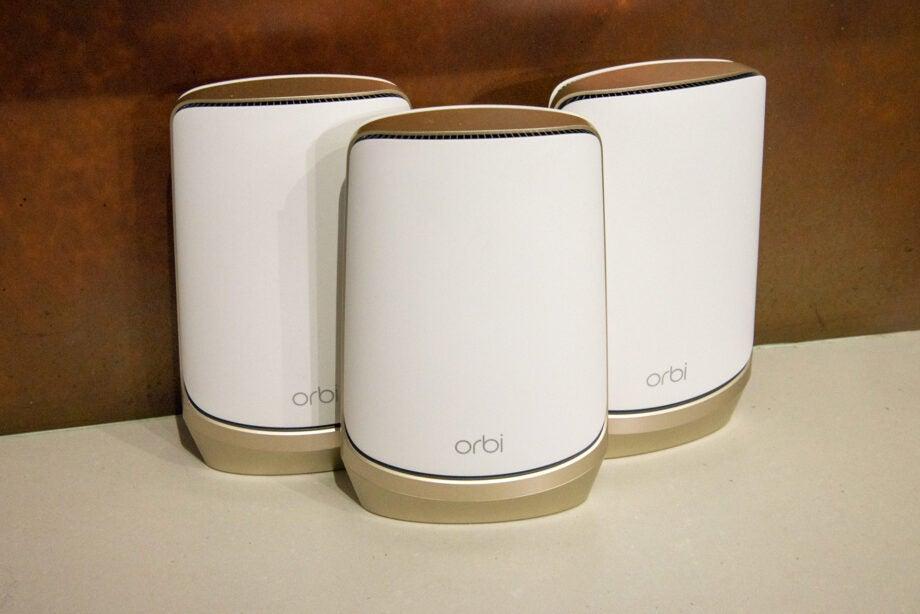 Also included is a 30-day trial for Netgear’s Armor network security software powered by Bitdefender. This service scans for security threats and protects every device on your network from malware intrusions. Once the trial period has expired, it will cost you $99.99 per year to continue using the Armor software.

You can control the RBKE963 system from your phone using the Orbi mobile app or from a PC using the web-based management console. The web console offers a handful of advanced settings that you don’t get with the app, including the ability to manage access control lists, configure a separate IoT network for all of your smart devices, and configure VPN settings.

That said, the mobile app offers lots of settings and is much easier to use. It opens to a dashboard screen that shows the number of satellites and contains panels labeled Device Manager, Security, Internet Speed, Parental Controls, Network Map, WiFi Settings, Guest WiFi, and Traffic Meter.

Three views, left to right, of the Orbi's mobile app

In Device Manager, you’ll see a list of all connected devices. Tap any device to create a profile for parental controls, configure security protection settings, install My Time parameters, and view current connection information. The Security panel opens a screen that displays your overall network security status, the number of threats detected, and how many vulnerabilities were found. Here you can also view recommendations for improving security.

The Internet Speed panel contains an Ookla SpeedTest button for measuring upload and download speeds, and the Parental Control panel is where you go to create profiles and assign parental controls to individual devices. (Note: Ookla is owned by Ziff Davis, PCMag's parent company.) The Network Map displays the router and the nodes: Tap any node to see which clients are currently connected to it. Wi-Fi settings let you edit your SSID and password, as well as change security settings, and Guest Wi-Fi is used to enable and configure a guest network. Finally, the Traffic Meter is where you go to view daily and total data transfer statistics (upload and download).

Wi-Fi mesh systems are known for their ease of use, and the RBKE963 is no different. To install the system, start by downloading the Orbi mobile app and creating an account. Tap "Set up an Orbi" when prompted, and use your phone to scan the QR code on the router node. Follow the instructions to unplug your modem and plug it back in, and then use the included LAN cable to connect the Orbi router to the modem. Power up the router, tap Next, place your satellite nodes where you want them, and power them up. Tap Next again, and wait a minute or so for the satellite to power up, then join the network from your phone when prompted.

After another minute or so, the satellites will be added to the network and you’ll be prompted to give the network a name and a password. Or, you can use the default name and password, which can be found on a sticker on the front of the router. Next, create an Admin name and password, set up Face ID if you're on iOS, and answer two security questions. After a check to see if the firmware is up to date, the installation will be complete.

The Orbi RBKE963 delivered some of the highest scores we’ve seen from any mesh system. We use a Samsung Galaxy S21 Ultra phone equipped with a Wi-Fi 6E radio to test throughput speeds on the combined 2.4GHz/5GHz radio band and the 6GHz radio band. On our combined band close-proximity (same-room) test, the Orbi router’s score of 920Mbps was significantly higher than what we saw with the Asus ZenWiFi ET8 router (869Mbps) and the Linksys Atlas Max 6E router (806Mbps). Its score of 362Mbps on the 30-foot test also led the pack.

Dark green indicates the strongest signal, yellow is weaker, and gray indicates no measurable signal reception. As shown on the map, the two Orbi nodes delivered strong combined (2.4GHz and 5GHz) wireless signals to all corners of the house. The Ekahau Sidekick does not currently measure 6GHz signals.

Empty Your Wallet for Stellar Wi-Fi

Given its asking price of $1,499.99, you’ll have to dig deep to afford the Netgear Orbi RBKE963 AXE11000 WiFi Mesh System, but in return you get the most advanced mesh system around. It’s a quad-band Wi-Fi 6E setup that can operate on the 6GHz radio band, and it uses the latest 802.11ax (Wi-Fi 6) technology to deliver speedy throughput and excellent signal range.

Granted, most users don’t need a system with this kind of power and coverage area, and its price is certainly prohibitive for most folks with a typical-size home. At approximately one-third the price of the Orbi, the Asus ZenWiFi ET8 is a more palatable option for most shoppers' budgets, and also an Editors' Choice pick. But if you demand the very best, and money is no object, the Orbi RBKE963 is as good as mesh kits come. It's our newest Editors’ Choice winner for Wi-Fi mesh systems.

The Netgear Orbi RBKE963 is a stellar (albeit quite expensive) three-piece Wi-Fi 6E mesh system that harnesses the 6GHz band to offer some of the fastest throughput speeds we’ve ever seen.