Over a year and a half after its first on-track test, the NASCAR Next Gen car was officially unveiled to the public Wednesday.

Chevrolet, Ford and Toyota revealed their respective looks for the Next Gen car, which makes its competition debut next season in the Cup Series after being delayed one year due to the COVID-19 pandemic.

“We really wanted to get back to a promise that we had made to the fans, which is to put the ‘stock’ back in stock car,” said NASCAR president Steve Phelps at the unveiling. “That was extremely important to us and our fans, but just as important to our fans is the racing on the race track.

“It’s hard to believe that the racing could be any stronger than it is last year and the first 11 races this year. But this car has features that will make it even better.

“Simply put, this car will make our sport healthier and stronger. It’s an exciting day for our industry and our fans, and I’m proud of all the work that went into bringing us to today.”

The #NextGen is here.

The Next Gen car officially represents the seventh generation of race cars in NASCAR’s premier division.

In a time of transition for the sport after years of decline, a wave of superstar driver retirements, and a dramatic schedule change, it could end up being the most important.

The look of the Next Gen car is sleeker and gives manufacturers a vital opportunity to better mimic their street cars. 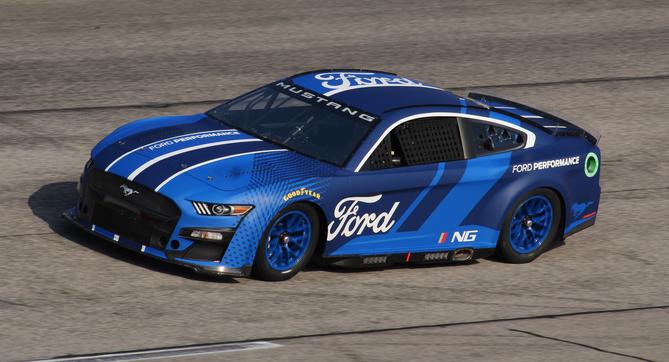 But there are even more important components.

With an eye on electrification in the future, a new transaxle combines the transmission and rear gear into one package.

Two other new components – an underwing and a rear diffuser – seek to improve handling in traffic and reduce the impact of “dirty air.”

Modern street car technology is incorporated with the addition of independent rear suspension, rack and pinion steering, a sequential gearbox, and bigger brakes.

Upgraded car connectivity will also allow for an in-car camera in every vehicle, with the ability to bring fans more real-time data in the future.

Many of the Next Gen car’s parts will come from single-source suppliers, easing the burden on teams to fabricate them and potentially providing teams an area of long-term cost savings.

NASCAR declared in February that the Next Gen car’s development was complete. Testing has continued since then. Ryan Blaney turned laps in a prototype Wednesday at Texas Motor Speedway prior to the public unveiling.

The Next Gen car was a much different experience for Kurt Busch when he and Martin Truex Jr. tested it last November in a two-day session at Charlotte Motor Speedway. One day was spent on the Roval, while the other was spent on the 1.5-mile oval.

“When I drove it at the Roval, (it) was much more agile with its acceleration, deceleration, and primarily, it’s maneuverability to switch back, left to right,” Busch said during a Wednesday teleconference.

“And the car was an impressive, easy two seconds quicker on the Roval circuit. And then, out on the oval, the car had a weird feel with the independent rear suspension on corner entry; and then corner exit with the aerodynamics that we were still balancing out.”

For Busch, who likened the Next Gen car’s design as “simple things” but with “new innovation,” success with the car will require an open mind for driver and team alike.

“I think the key thing for any driver to be successful, no matter where you are and what you’re doing – you have to adapt,” he said. “And the adaptability of a driver, and his openness and willingness to challenge himself or herself is to find things that work for them and the team, and make sure they are confident in those directions and go that way.”