The session, titled "The Future of Cities and Dubai's Role", highlighted the reality of cities in the post-pandemic period, future trends of urban communities in light of recent technological advancements, and Dubai's role in inspiring future cities.

Clark, who has consulted more than 50 governments and 200 cities globally, discussed the concerns of scientists and decision-makers regarding the future of cities, such as decarbonisation and rapid changes in digital communications and services.

Having worked for many international institutions, such as the World Bank, the Brookings Institution, and OECD, Clark spoke about Dubai's pioneering experience.

"The pandemic has stimulated human appetite for the interactions that cities make possible," he told the audience. "I think it will lead our cities to make big switches, such as the move away from dependence on corporates and consumption to focusing instead on habitats, environment and experiences. 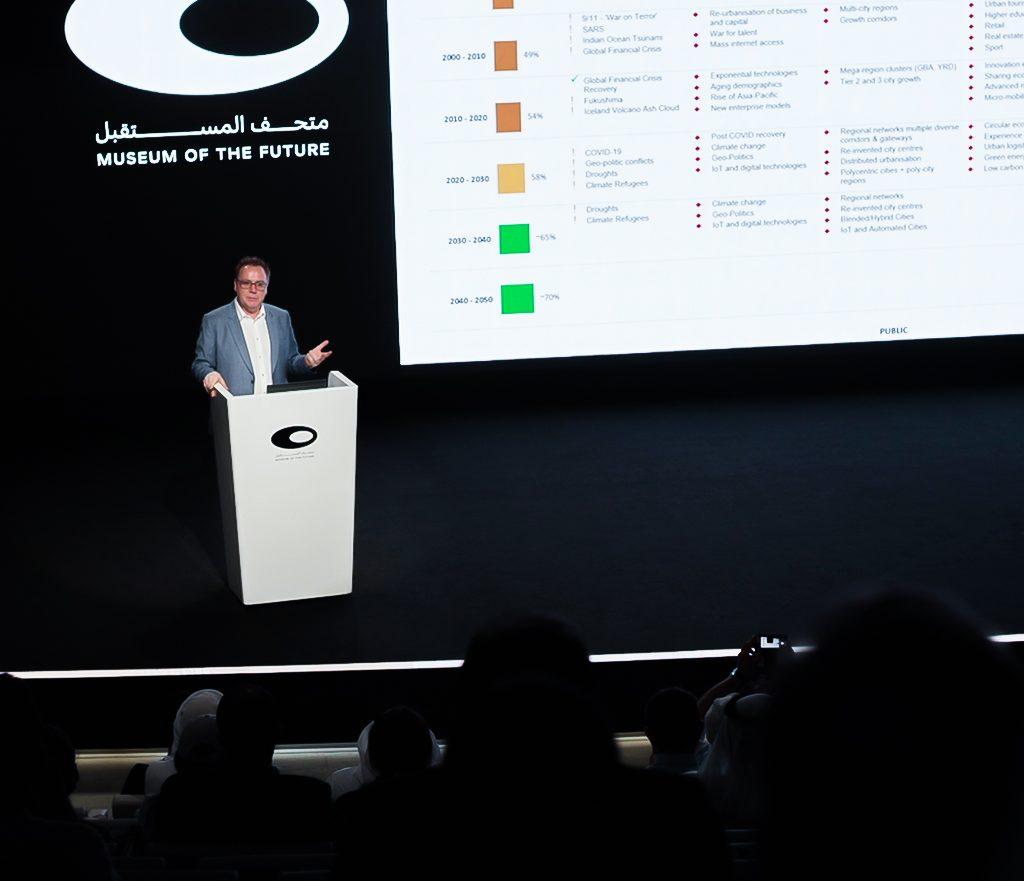 "We're at the beginning of another decade. This will be a decade about health, clean air, technology innovation, and cities that can bring together people from diverse backgrounds and create a coherent social community. This is a decade about optimising the use of new digital technology not to create 'robot cities' but to create cities that can be co-created by leaders and citizens."

Clark continued, "Dubai has an opportunity to lead the global debate about what it means to be a post-pandemic city, a leading global city. Dubai's position in the global family of cities is changing radically. Dubai is creating a new kind of city. It is being seen not just as a leading city in the region but also as a leading city in a region that is now opening up."

Saeed Al Gergawi, Head of Dubai Future Academy, said, "The main mission of the Museum of the Future is to bring together futurists and people with inspiring and innovative ideas about the future of humanity. Cities are a key pillar in this context. The museum empowers sectors and individuals to design future cities and societies and create new concepts for Dubai that enhance its position as 'the city of the future."

He added, "The extent to which the museum is interested in the future of cities is clearly showcased through its exterior design, which sets a new benchmark for sustainable construction. This is in addition to its futuristic labs that support innovation in health, education, smart cities, energy and transportation, and its exhibitions which contain prototypes in the fields of waste management, environment, food security, agriculture, city planning, and 4IR tech; all of which are key to designing future cities."

Speaking about the importance of building sustainable cities, Clark said, "The net-zero city will save money, particularly for people on low incomes. It will improve our mobility choices. It will produce cleaner air, reducing our exposure to respiratory diseases. The net-zero city is not just an environmental idea; it is an idea of how to reform our cities to make them better places to live."

Professor Greg Clark's session is part of the Future Talks series that was launched by the Museum of the Future on 24th February 2022 and is available for free on the website https://talks.museumofthefuture.ae/ The sessions host global futurists, CEOs and business leaders to discuss topics related to humanity's relation to robots, Dubai's role in investing in the future, the future of mixed reality, state of sciences and the Arab world, the future of mobility, the role of the metaverse in changing the world, future of finance and technology, and state of the world in 2022.