PHILADELPHIA -- A fairly fascinating day in Philly on Monday.

Four stories of the day emerged. Starting on the field, both Cam Newton and Mac Jones scuffled some on the first of two fully-padded practices against the Eagles. The Patriots took another ding at the tight end position and that position of depth is shallowing out. The teams’ defenses both carried the day. And Newton spoke after practice acknowledging he hasn’t been told he’ll start against Miami in Week 1.

Accepting that Belichick was naming his September starter on draft night would be exercising blissful ignorance of the fact Belichick 1) plays the most productive player and 2) has Newton here on a short-money, one-year deal coming off a season where he threw eight touchdowns and 10 picks.

Belichick made that declaration publicly to head off daily, “Who’s winning the quarterback competition?” questions. And it’s kinda worked. As we’ve been busy charting the progress of Jones and Newton, nobody bugs Belichick about it because he got it out there that Newton’s the starter.

Newton still takes the majority of starter reps. But Jones gets in with the 1s as well and gets a ton of work with the backups. And every day for the past two weeks, Jones has outperformed Newton. 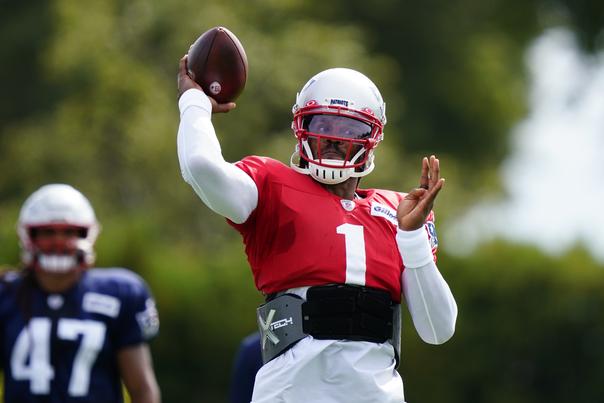 It’s a competition and Newton may have had pole position at the start but he hasn’t been told how it will end.

When first asked by Greg Bedard of Boston Sports Journal if Belichick had told him he’d start Week 1, Newton said, “You know the answer to that question.”

Not really, I offered. Because Belichick stated, “Cam’s our starter ...” twice this offseason, nobody knows definitively whether Belichick meant “at this time…” or not. I asked Newton to clear it up.

"I don't know what y'all want me to say," Newton responded. "You know he hasn't said that, so for you to just ask the question, it is what it is. Every single day I'm coming out here with the anticipation to just get better, and that's the only thing that I can do. So, I can control that."

So there you go. It ain’t over until it’s over. And it certainly wasn’t over in April. Or at the start of camp. And it’s even less over now.

The Patriots came down to Philly with their big-ticket tight ends Hunter Henry and Jonnu Smith both dinged up. Henry’s been down with a shoulder issue since last week. Smith has a lower leg issue suffered Sunday. Then things got worse.

Tight end Matt LaCosse, chasing a shallow-crossing throw from Cam Newton, ran smack into Eagles linebacker Derek Barnett. It was a significant collision in a semi-non-contact drill and LaCosse went down hard and didn’t get up for a couple of minutes. He left the field looking expressionless and followed the training staff right off the field. LaCosse sat out 2020 because of COVID concerns.

He’s been OK in camp with some competent days both as a blocker and receiver. His injury meant both second-year player Devin Asiasi and Troy Fumagalli get almost all the tight end reps after that. Smith and Henry were both in Philly for the workouts but neither was involved on Monday.