Keep Calm And Hack On: The Philosophy Of Calm Technology

So much smart-tech is really kind of dumb. Gadgets intended to simplify our lives turn out to complicate them. It often takes too many “clicks” to accomplish simple tasks, and they end up demanding our attention. Our “better mousetraps” end up kludgy messes that are brittle instead of elegant and robust.

The answer might not be faster or newer technology, but a 30-year-old philosophy. Some great thinkers at Xerox PARC, the place where, among other things, the computer mouse was invented, developed principles they called Calm Technology.

I am a long-time fan of Cool Tools and listen to the podcast often. I really enjoy the conversations around the choices of favorite tools that each guest brings, not to mention the challenge of not immediately buying everything they have spoken about so passionately. I hear the hosts Kevin Kelly and Mark Frauenfelder struggling with the same inner battle along with me each episode. Every now and then, a guest flips the script and decides not to talk about physical tools and devices but services and even concepts. Recent guest 2021 Mozilla Fellow, Amber Case introduced me to a concept for the design of user experiences called Calm Technology, and I immediately connected with it.

What are Calm Technologies?

Let’s take a look at the principles of Calm Technologies from calmtech.com:

Technology should require the smallest possible amount of attention

Technology should inform and create calm

Technology should make use of the periphery

Technology can communicate, but doesn’t need to speak 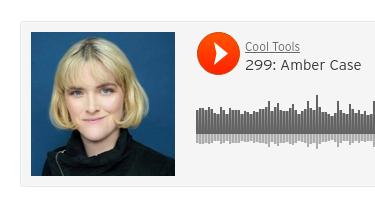 Technology should work even when it fails

When we surround ourselves with technology, the purpose is what matters. The “stuff” shouldn’t get in the way. I once had a boss who would say, “tell me the time, not how the watch works.” Adding multiple calm technologies into your environment shouldn’t overwhelm you or create noise since each will remain in the periphery until needed.

People should never be forced to act like machines. One place where I see that happening is with chatbots. When chatbots work well, they can create a delightful interface to get information without waiting on hold for a human assistant. I suppose the best of these experiences is when the chatbot announces itself as such and is there to allow me to act like a human, using natural language to communicate with machines. Pretending (and failing) to be human is where they cross “the best of technology and the best of humanity” line; we feel somehow wronged. This goes for notifications too. We’re hard-wired to pay attention to the faces and voices of other people, so a spoken alert is nigh impossible to ignore. Could a long status message be replaced with a simple “yes” or “no” or even an indicator that is either green or red?

Now we arrive at what are likely already core tenets in how you view the role of devices in our modern world. They shouldn’t be useless upon failure, they shouldn’t be overbearing, and they should fit into what we already expect in our lives. We have covered far too many devices that rely on a remote server or proprietary consumables to operate. These can turn an otherwise calm technology into a brick. And nobody wants to be weirded out in normal interactions; a conversation with a friend would be quite different if you pulled out your phone and started recording a video, so no wonder there is debate about the AR glasses from Snap just as there was with Google Glass. Someday that may be a new norm, but we aren’t there yet.

Where to Apply This Philosophy

If studies are right that it takes 23 minutes to regain focus after being interrupted, I likely spend very little of any given day actually being focused. Worse yet, the dopamine I get from all my notification chimes and buzzes probably has me hooked on never putting an end to them. When I look for some information, it often takes an excessive number of “clicks” that make it hard to return focus to something else.

I love the tea kettle example that CalmTech uses. When cold and while heating up, the kettle is in my periphery. There is no progress bar, as I don’t need to know when the water is 50% on the way to boiling; it’s either quiet or whistling and ready to make tea or coffee.

A smart home is fertile ground for calm technology. Many useful-sounding products like smart-plugs require a proprietary app to operate and aren’t calm or friendly to visitors to your home. But, an in-wall switch that can be operated manually and when the network is down but is enhanced by MQTT (or other smart-home protocols) is calm technology and gives you the best of both worlds.

That might sound great for future consumer products and services, but how does it relate to hacking?One avenue is the opportunity to apply these principles to devise superior calm versions of existing products. One recent example featured here is the 3D printed custom remote for the elderly.

New experiences can use these principles to make inviting, compassionate, and successful interfaces. In design school, I heard about a new device called the Ambient Orb that could deliver a “news feed” in the form of a color-changing sphere. Information of your choosing, the stock market, or weather forecast could be selected to drive the color of an object that sits in your peripheral vision. These days, in an afternoon, an ESP32 and an RGB LED could reproduce that for any data stream you could imagine. Another wonderful example of calm technology is the Juuk RFID music player for kids & the elderly with an immediate and straightforward, tactile interface for accessing digital music with no logins, complex nested menus, or pop-up ads.

Don’t get me wrong; there’s still a place for robot arms, blinking LEDs, and flame-throwing creations. The original paper said that not all technology should be calm. For example, the authors stated that video games shouldn’t be calm technology, and they would be failures if they were.

There is a time for tech demanding your full attention, but it should be on your terms, not because of inadequate or lazy design.