Older homes sometimes lack a neutral wire (which is typically white) in every box where a light switch is installed. That can be big problem for smart switch upgrades, which almost universally require a neutral wire to power the electronics that render them smart. A few manufacturers have figured out workarounds—including GE Lighting with its Cync line (formerly branded as C by GE). Now Jasco is entering the space with its Enbrighten brand.

The sell is simple: Rather than requiring four wires, this switch only needs three to work: line, load, and ground. Even better, with the Enbrighten dimmer you don’t need to worry which wire is the line (bringing electricity to the dimmer) and which is the load (sending electricity to the light fixture).

Thanks to Jasco’s SimpleWire technology, which we previously encountered in its Zigbee smart dimmer, this Z-Wave Plus switch can identify the line and load wires all on its own; so you can plug those two wires into either of the primary wire holes. There are also no pigtails and wire nuts, and no wrapping wires around terminals either.

This review is part of TechHive’s coverage of the best smart switches and dimmers, where you’ll find reviews of the competition’s offerings, plus a buyer’s guide to the features you should consider when shopping for this type of product.

Presuming you can figure out which wire is the ground (which should be easy, since the ground wire is almost always either bare or enclosed in a green jacket), connecting the Enbrighten No-Neutral Smart Dimmer really couldn’t be simpler—it even supports multi-way installations via an optional traveler line. Also note that while no wall plate included, the dimmer does come with two colors of paddles, white and light almond. 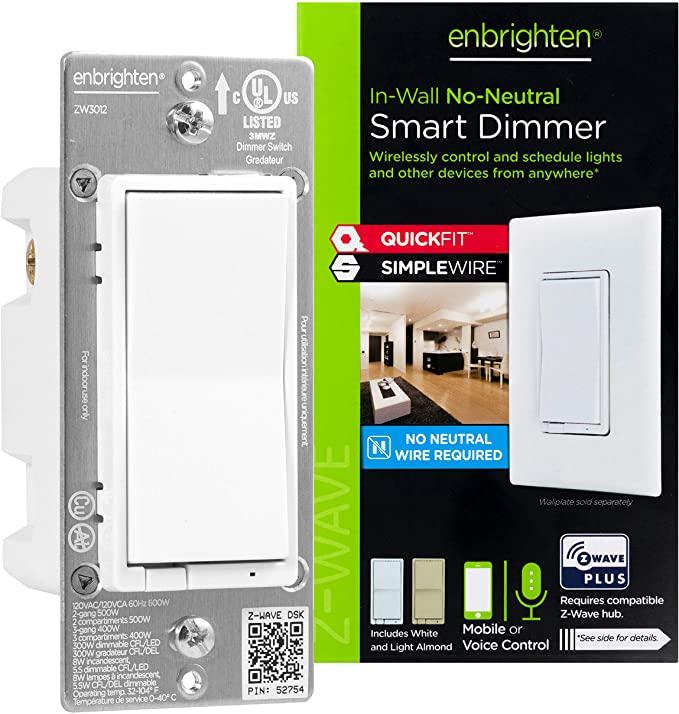 On paper, the dimmer is amazing. It installs quickly and easily, positioning you to pair it with your Z-Wave hub in a matter of minutes. Unfortunately, when I tried pairing the dimmer with a SmartThings hub, the SmartThings app popped up a strange error after scanning the QR code printed on the device, saying that the code couldn’t be verified. Repeated attempts to scan the code resulted in the same error, after which I figured a product reset should be in order. That didn’t work either: Clicking the light on three times then off three times is supposed to factory reset it, but I was never able to get it to return to defaults.

I called Jasco’s tech support and was sent to voicemail. No one ever returned my message. I attempted to escalate the issue with a Jasco product manager, but couldn’t arrange a support call until a full week later. Eventually, after 20 minutes on the phone with a pair of technicians, I was able to push my way through the connection to SmartThings. (Resetting the unit requires a very careful cadence when you press the up and down rockers; if it’s too slow or too fast, it won’t work.

Other than that, the solution was largely a brute force matter of trying to connect to the dimmer over and over again until it eventually worked. At last, the dimmer showed up in SmartThings—as a GE-brand dimmer. Jasco, which licensed the GE brand for a time (you’ll still encounter boxes labeled as such at retail), says this is Samsung’s fault.

In SmartThings, operations are basically as expected, with manual on/off/dimming functions, a countdown timer, and separate schedules for turning the lights either on or off. Naturally, the unit can interact with other devices you have connected to SmartThings, and it also works with Google Assistant and Alexa.

Once I got the switch working, things were fine while working with it via the app, but I wasn’t a big fan of the way the dimmer operates in the flesh. The device looks like a standard paddle switch, with no separate dimming controls, but as I alluded to above, it’s very finicky. For example, you need to be very quick when you tap and release the upper paddle to turn the lights on to their previous brightness setting. Hold the onto rocker for just a fraction of a second too long, and the brightness adjuster will kick in, leaving you with a dim bulb instead. Same goes for turning the lights off. Hold the rocker down for a touch too long and you’ll just dim the lights a bit rather than turning them off completely.

It’s tough to get this perfect, and a week into testing it is still causing problems for the less tech-savvy members of my household. In a nutshell: If your light switch is too unintuitive for the masses, you need to make some changes to the way it works.

Other features, such as turning the onboard locator LED off, or setting the maximum and minimum brightness settings are a bit obtuse, so hang on to the manual to ensure you don’t lose the sequence of up-down rocker presses required to make these changes.

At $40, this is one of the more expensive Z-Wave dimmers on the market, though there aren’t many overly affordable options to choose from. Compound the price with the considerable trouble I experienced with setup and the dearth of tech support, and ultimately I can really only recommend this dimmer if you both absolutely need Z-Wave connectivity and are unable to use neutral wiring.