Here are the deets on the nine best alarm clocks for all budgets, styles, and needs.

This compact clock has a streamlined design and a B-I-G number display. The illuminated LED digits are easy to see from across the room (or Alaskan king bed).

It also has a dimmer that lets you set the brightness from 0 to 100. But you can turn it down at night, so the bright light doesn’t keep you up.

It has a single alarm setting with a classic 9-minute snooze. You can adjust the alarm sound from 30 to 90 decibels (dB). This popular feature is def dope for deep sleepers that need a little extra nudge to wake up, but it’s also nice for folks who want a softer sound to wake up to.

Some reviewers say the LED digits faded after a few months. But overall, peeps are super satisfied.

The Amazon Echo Show 5 gives you a big bang for your buck. It boasts a tap-to-snooze function, ambient light sensor, and sunrise alarm setting. You can set multiple alarms and wake up to the weather forecast, your favorite music, or news updates.

But the best part? The Echo Show 5 connects other devices so you can control the lights, cameras, and other compatible devices in your home. You can even stream your favorite movies and shows, and make video calls using its built-in camera.

Overall, reviewers think this clock is the tops. But a few folks claim customizing the display and learning all the settings can be a bit of a pain. Also, some say that the sound quality isn’t the best.

Clocking in under $15, this digital alarm hits every important feature at a low price. 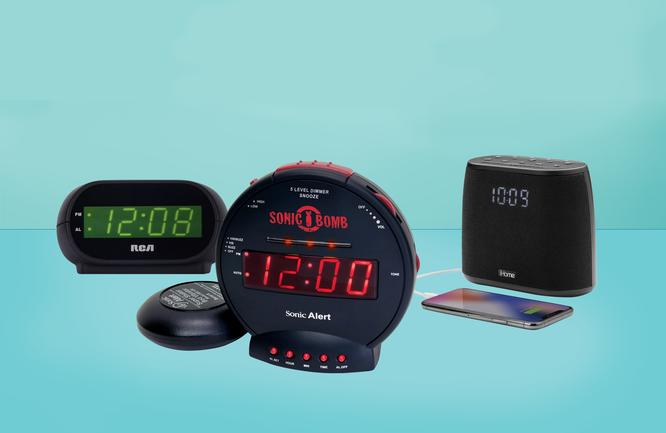 It has a built-in night light and big digits. The repeating snooze function comes in clutch if you want to sleep in a bit. Folks also like that it’s easy to use and simple to set up.

Its small size makes it great for small nightstands or shelves. It only comes in black, but it has a sleek oval design. Bonus: The backup battery power can retain the clock’s memory for up to 8 hours.

All in all, reviewers say this budget-friendly alarm clock gets the job done. But multiple folks say the alarm is L-O-U-D. So, if you don’t like waking up to the sound of a foghorn, this clock might not be bae.

This sunrise alarm clock is where it’s at. It has 20 brightness levels and multiple alarm settings. You can have the sunrise simulation light turn on 10, 20, or 30 minutes before the alarm goes off. The snooze function will give you an extra 9 minutes of shuteye, and you can press it up to five times. Oh, and you can set the clock to indigo, indigo blue, purple, orange, yellow, red, or green.

On top of looking great, you get to wake up to your choice of alarm sounds. You can pick from ocean waves, streams, birdsongs, bells, soft music, beeps, piano music, or FM radio. There are 16 volume levels, so it’s great for soft to deep sleepers.

But wait, there’s more! This clock doubles as a bedside lamp, night light, and reading lamp. The only downside seems to be the radio function. Some reviewers say they weren’t able to find a station that didn’t sound like pure static.

This bomb clock is ideal for heavy-duty snoozers. It’s 113 dB, vibrates aggressively, and has bright red flashing lights. You can program multiple alarms and set the snooze from 1 to 30 minutes. The full-range dimmer lets you adjust the lighting so it won’t wake you in the night.

Reviewers say this clock is the real deal. Meaning, it’s extremely loud and will kick-start your day with a bang. Also, it’s super adjustable. You can set it to silent, so the alarm doesn’t disturb your fam or roomies.

The vibrations and flashing lights are also ideal for folks who are hearing impaired. You can also choose between fun prints and colors like blue, blue, and black, camouflage, black and red, pink, red, or turquoise.

PSA: Your neighbors might not appreciate the wake-up call. Also, a few reviewers say the setup is confusing.

Sometimes, bigger really is better. This large-screen display is very easy to read. It clearly spells out the time, time of day (e.g. morning, afternoon, or night), day of the week, and the date. You can set up to five daily alarms with medication reminders.

The frame comes in five colors: black, black polished, white, brown, or mahogany. It has a sleek design and will fit on most nightstands, desks, or shelves.

Reviewers rave about the display format and overall look. It has a battery backup just in case the power goes out, and it automatically resets to the correct time if it gets shut off. But some don’t dig the auto-dimming feature and the lack of customizable settings.

Psst. You’ll need one CR2 battery, which isn’t included in the box.

We love a combo pack. This alarm clock also acts as a night light and FM radio. You can adjust the alarm sound and volume to match your morning vibe — choose between built-in beeping sounds, birds chirping, or your favorite FM radio station. It also has a glow feature with seven colors and five brightness levels.

The buttons light up so you can adjust the settings or set your alarm in the dark. It features a nap timer that ranges from 10 to 120 minutes. You also get a regular sleep timer that turns off the night light and radio automatically.

Reviewers love the backup battery system. If you lose power, the alarm should still go off in the a.m. while running on three AAA batteries (not included). But full disclosure, a few folks say they got a faulty clock that stopped working after a few months.

This alarm clock is a beautiful blend of design and function. It’s super sleek, stylish, and easy to use. But the standout feature is its charging dock. It will wirelessly charge most smartphones as you sleep. You can set two alarms at a time and the sound can be adjusted from 60 to 90 dB. It also has a snooze feature.

The clock comes in bamboo, black, brown, or white and has clear LED digits that show the temperature and time. It can be dimmed from 0 to 100 percent so it won’t disturb your REM cycles. It plugs into the wall, but also comes with a lithium metal battery.

Reviewers say this clock charges their phone quickly and efficiently. Peeps also say the digits are very clear and easy to read. But it’s worth noting that some folks say the charger can be a bit finicky. You have to place your phone in the right spot for it to work correctly.

This travel alarm clock is basic in the best way. Unlike other travel clocks, this one keeps things simple. It has a clear display, a simple alarm, and a standard snooze feature. You can use the 5-second on-demand light to see the time in the dark. And when you’re done, all you have to do is snap it closed. We also love that it’s very compact and lightweight.

Another perk is the ON/OFF button. Not only will it conserve battery, but it can also stop the internal time. That way, you don’t have to reset it when traveling to a different time zone.

Reviewers like this alarm’s no-frills attitude. It’s also a great value for the money. The downside is that it might not be loud enough for very deep sleepers. A few folks also say that the night light is too bright.