There are many, many things you can argue about when it comes to cars - Holden vs Ford, turbocharged engines vs naturally aspirated ones, Volkswagen vs The Truth - but there are a few inarguable facts that no amount of bluster or balderdash can defy. And top of that short list would be the statement that rear-wheel-drive cars are more fun than front-wheel-drive ones.

Sure, you can argue that front-drivers, or bum draggers as their haters call them, are "better", because they're safer, cheaper to make and more manageable on slippery surfaces, but when it comes to driving joy and involvement there is simply no contest; it's like chocolate vs cabbage.

Indeed, one highly respected maker of fun, drivers' cars used to base its whole sales strategy on the idea.

BMW was the "sheer driving pleasure" company before it was the "ultimate driving machine" and it used to proudly proclaim from the roof tops that all of its cars were rear-wheel drive, because this was quite simply the best way to make them. Furthermore, its Germanically insistent bosses assured the world, it would never, ever put its propeller-head badge on a front-wheel-drive car, because that would defy its driving-pleasure promise.

The Mini, of course, was its first slight breach - it owned the company and designed the cars, but at least they didn't wear BMW badges - but the men from Munich stuck to their guns, even through the development of the 1 Series, a car that possibly would have made more sense, particularly financially, if it was a front-driver.

Removing the transmission tunnel that has to take power to the driven rear wheels frees up lots of space in small cars, like hatches and Minis, and also saves money. It doesn't take an engineer, or a genius, to work out that driving the front wheels, when the engine sits so close to them already, is a simpler and more elegant solution.

BMW has now at least partly admitted this, by building its never, ever-land car, the 2 Series Active Tourer, but this merely means it is finally following the trend set by just about every car maker on the planet since the front-drive set up was properly popularised by the Austin Mini, in 1959 (yes, Citroen, with its 2CV, and others got there first, but Mini made it look cool, and sensible, freeing up 80 per cent of its tiny floor pan for passengers by using FWD and mounting the engine transversely - east to west - instead of longitudinally).

Interestingly, BMW also claims that its research shows up to 85 per cent of Australians don't know which wheels are putting the power down in the cars they drive. 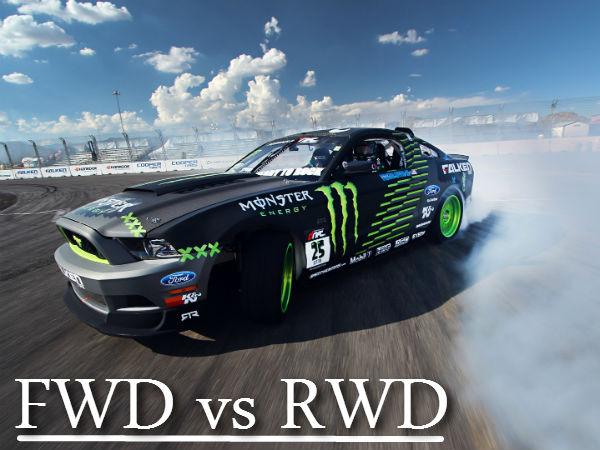 Packaging wise, front-wheel-drive cars are obviously superior, and safety wise they are overwhelmingly the choice of most manufacturers because they allow designers to build in understeer, which causes a car to go straighter than the driver intends when push comes to shove, rather than oversteer, which makes the rear of the car step out in what is either an alarming or exciting manner, depending on your point of view.

No one, however, has ever argued that understeer, the default setting of FWD, is fun.

Rear-wheel drive is pure and unadulterated, it is the balance that God Himself would have given cars

Partly, it is oversteer that makes rear-wheel driven cars more fun, because there are few things as satisfying, and heart fibrillating, as catching and correcting an oversteer moment, or, if you're on a track and in possession of the necessary skills, holding a rear-wheel slide.

But there is more to it than that, much more, some of which can only be explained by steering one of the world's many great rear-wheel-drive cars - a Porsche 911, every proper Ferrari, a Jaguar F Type, and so on - around a corner. This ancient and revered set up allows you to get power down out of bends in a far superior manner, and provides better feel and feedback.

The problem with FWD is that it simply asks the front tyres to do too much, steering the car and putting power to the ground at the same time, a task that can lead to horrible things like torque steer. Driving from the rear leaves the front wheels the job they are best designed for, telling the vehicle where to go.

Rear-wheel drive is pure and unadulterated, it is the balance that God Himself would have given cars, if he'd bothered to invent them back before we wasted all that time learning to catch and ride horses.

Front-wheel-drive cars have been winning the argument, and the sales-volume case, for many years now, of course, and a lot of modern faux SUVs now come with FWD options because they are cheaper and more fuel efficient than a 4WD system owners will never use.

But in recent years, RWD has experienced something of a renaissance, particularly thanks to cheap, fun sports cars like the Toyota 86/Subaru BRZ twins, which proved just how slip-tacular the rear-driven layout can be.

More recently, the now cheaper and even more attractive Mazda MX-5 reminded us all again of why proper sports cars should, and hopefully always will be, rear driven.

Yes, it is absolutely the case that there are some great front-wheel-drive cars, like the RenaultSport Megane and Ford's fantastic Fiesta ST, but any enthusiast would argue that both of those vehicles would be even better if their drive came from their rear wheels.

It's also possible to mount a case that all-wheel-drive cars are better than FWD or RWD, but that's another story.