The Vivo T1 is the latest phone by Vivo in its new T-series which aims to offer great and well-rounded performance along with gaming chops. It is only the second phone to arrive with the Snapdragon 695 after the Moto G71 and wants to make its name in the sub-Rs 20,000 budget segment with features like a 120Hz refresh rate display, Android 12, 50Mp triple cameras and a large 5,000mAh battery. But does all of that make it a value for money offering at a starting price of Rs 15,990? Here’s what we found out.

The Vivo T1 is powered by the Snapdragon 695 chipset that features an octa-core CPU and Adreno 619 GPU. The CPU consists of two performance cores clocked at 2.2GHz and six power-efficient cores running at 1.7GHz. Vivo is offering 4GB/6GB/8GB RAM variants paired with 128GB UFS 2.2 storage and the T1 runs on FuntouchOS 12 based on Android 12 out-of-the-box.

In my use, the general performance of the Vivo T1 is decent and nothing extraordinary. More often than not, the T1 showcases stable performance but it doesn’t mean that the phone is free from lags and frame drops, something I experienced when scrolling through the app drawer, settings menu or browsing on Chrome or Instagram. It’s unnoticeable at times but is present nonetheless. Otherwise, the FuntouchOS 12 based on Android 12 usually powers through the day without any issues. One of my pet peeves with this phone, however, is that it comes with its fair share of bloatware with apps like Cred, Koo, Josh, Moj, MX TakaTak and ShareChat. Now, you can, of course, choose to uninstall these apps but it’s a hassle and comes in way of a clean UI.

Coming to the synthetic benchmarks, the Vivo T1 with Snapdragon 695 received a higher score than the Redmi Note 11T (review) which is powered by the Dimensity 810 chip but falls short of the performance showcased by the iQOO Z3 (review) which has the Snapdragon 768G.

In Geekbench tests which simulates real-world use, the T1 did not manage to one-up either the Redmi Note 11T or the iQOO Z3. Similarly, in PCMark which simulates workloads like photo/video editing, web browsing and more, the Vivo T1 was unable to catch up with the Dimensity 810 and the Snapdragon 768G which means that you will experience a drop in performance when performing intensive tasks.

We also used CPU Throttling app to check whether the phone struggles to perform under extreme workloads and restricts performance. Here, the phone throttled to 92% of its maximum performance which means that it is tuned to restrict performance in order to keep it running cool.

If you are expecting the Vivo T1 to give you an edge in gaming, let me just outright tell you that you’re in for a disappointment. The gaming performance of the T1 is nothing to write home about. But before we get to the games, let’s take a look at some of the GPU scores.

In 3DMark and GFXBench tests, the Vivo T1 received decent scores but nothing that matches the GPU performance offered by the Snapdragon 768G on the iQOO Z3.

We used Gamebench metrics to record the gaming performance of the T1 in games like COD Mobile, BGMI and Asphalt 9. The data recorded by Gamebench shows that the Vivo T1 is able to run COD Mobile at 60FPS at 100% stability on High graphic quality and Max frame rate. Upon bumping up the graphic quality to Very High, the frame rate defaults to Very High from maximum and here Gamebench recorded 59FPS at 83% stability.

While these numbers may not give you a full picture of the phone’s performance in real-world scenarios, let me just say that my gaming experience with the Vivo T1 remained above average at best. There were noticeable frame drops, lags and jitter when playing COD Mobile and BGMI at their highest settings. Lowering down the graphic quality did ease my experience as the frame drops didn’t occur as frequently as before. 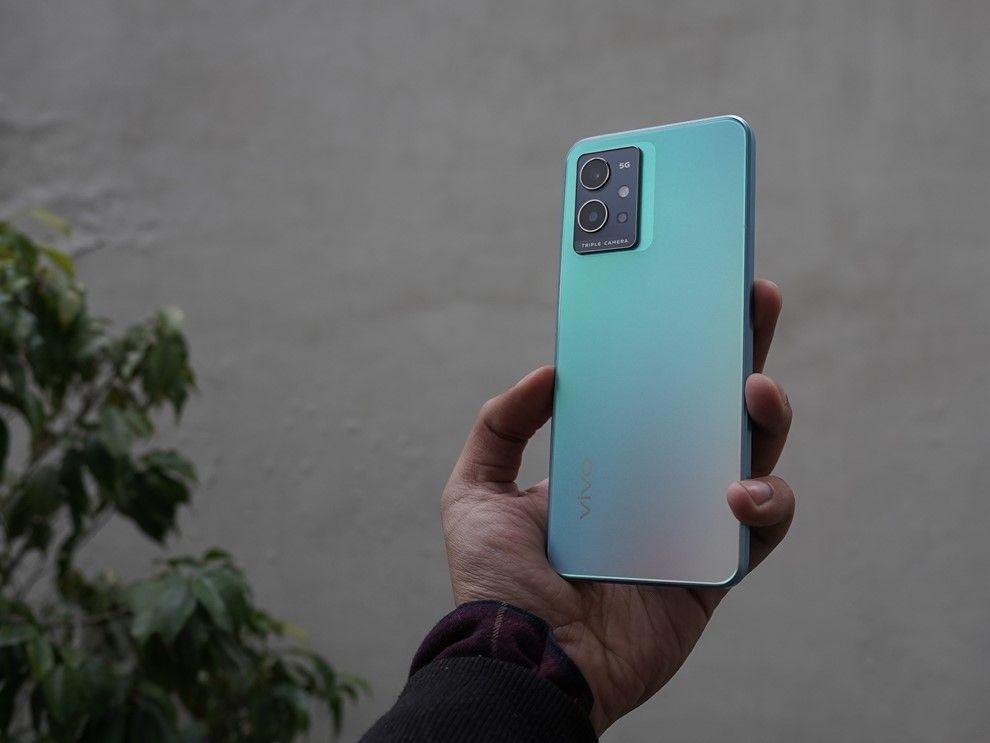 The Vivo T1 has a 5,000mAh battery that supports 18W charging speeds which as per Vivo’s standards qualifies as “fast charging”. However, in my books, that’s a shoddy excuse likely to save costs and prevents budget phone buyers from experiencing real fast charging speeds. Even a 30W or 33W fast charging support would have done wonders because it took around 2.2 hours (132 minutes) to fully charge the phone from 0-100%. As for the battery life, since it's a high capacity 5,000mAh battery, it managed a day’s worth of use very easily and if you are not a heavy user, it will offer more than a day’s worth of use.

The Vivo T1 has triple cameras on the back headlined by a 50MP camera with an f/1.8 aperture alongside a 2MP macro camera and a 2MP depth sensor. The rear cameras can record in 1080p at up to 60FPS. On the front, we get a 16MP selfie camera that is housed within the waterdrop notch.

The main camera on the Vivo T1 does a fairly admirable job of taking detailed, bright and colourful pictures. The images come out pretty sharp with all the textures and highlights though the HDR processing could sometimes misfire and produce over or under-exposed pictures. That said, in my use, I loved the main camera performance of the T1 which is capable of producing Instagram-worthy images without requiring any major touch-ups. The main camera does lend a natural-looking depth of field effect which looks pleasing to the eye.

There is a portrait mode too which gives an artificial bokeh effect to the picture but the colours in portrait images tend to be inclined towards the cooler spectrum than what we get from the main camera. The portrait mode images are also slightly lower in resolution than the ones from the primary sensor, as are the details and textures.

In low light, the pictures from the main camera are filled with noise and struggle to identify the details and textures. The night mode is of little help but manages to reduce the noise in some cases. Sometimes, the night mode makes things worse as it is unable to lock down the focus points which results in blurred out images.

One thing to note here is that the night mode is not available on the 4GB RAM version of the Vivo T1 which is a bummer for those looking to buy the base variant.

As for the macro camera, it’s a hit and miss affair as the low-resolution 2MP sensor is fixed-focus which is a big hurdle when you want the camera to keep the object in focus. The pictures from the macro camera are barely usable but are decent-looking if there is ample light falling on the object.

The 16MP front-facing camera does a good job of producing selfies and there are different styles, filters and light effects to choose from. In the portrait mode, however, the front camera needs further optimizations to accurately identify the foreground from the background.

Being a budget phone, the Vivo T1 has a plastic build and is being offered in two colours: Rainbow Fantasy and Starlight Black. We have the Rainbow Fantasy colour with us and it has a shiny gradient look on the rear panel with a fingerprint-resistant matte finish.

The T1 has a flat-edge design with rounded-off corners which make it comfortable to hold in the hand without any unnecessary stress. The device is 8.3mm thin and weighs around 187 grams, which does not feel too hefty and has great ergonomics for daily use.

While the T1 does not feel as premium as some of the other phones in the segment like the Redmi Note 10 Pro Max, it has a balanced and non-gimmicky design in my opinion.

The Vivo T1 features a 6.58-inch LCD that offers a Full HD+ (2408x1080 pixels) resolution and a waterdrop notch for the selfie camera. The display also supports upto 120Hz refresh rate and has a smart switch mode wherein the refresh rate of the screen changes automatically based on the usage. The screen is also certified for HDR10 playback which means that you can enjoy streaming services like Netflix in high definition. Though, the phone does not come with stereo speakers so it isn’t able to offer an immersive viewing experience which could disappoint potential buyers who watch a lot of videos on their phones from YouTube or elsewhere.

The T1 has a slightly wide chin and the presence of a dated waterdrop notch doesn’t look appealing to the eye as well. In my opinion, the display is one of the downsides of this phone as it is an LCD panel that is biased towards cooler colour temperatures. We recorded around 400 nits on full brightness which is a bit lower than I expected. To top it all, the T1 does not come with any kind of protective layer of Gorilla Glass, Panda glass or Dragontrail glass which is a bummer, especially when you consider its asking price.

The Vivo T1 tries to do a lot of things by offering features like a high refresh rate display, Snapdragon 600-series chipset, multiple cameras and a high-capacity battery to boot, all under Rs 20,000. But we can’t ignore the fact that it comes as a downside when you look closely at these features. The display uses an LCD panel, the ultra-wide sensor is missing from the camera stack and the phone takes aeons to fully charge.

The Snapdragon 695 chip offers a balanced performance but any potential buyer should not expect too much from it. While the performance is better than the Snapdragon 680 found on phones like the Realme 9i, it is still nowhere close to SoCs like the Dimensity 810 and Snapdragon 768G.

The main camera is pretty solid and will get you some really nice pictures when you need but it's not as versatile as the competition. Things like the presence of a mono speaker instead of a stereo speaker do inhibit you from getting an immersive experience which is a bummer.

So, if you are someone looking to buy a phone to satiate your gaming needs, you may want to steer clear from the Vivo T1 as it only does the fundamentals right. But if you are looking for a daily driver that you can depend on for basic use like web browsing, social media, watching videos or listening to music and maybe some occasional gaming on the side, the Vivo T1 will serve you well. Just ensure you at least go for the 6GB RAM variant!