FORD Australia has lifted the covers from its new Ranger this week, the fifth-generation light commercial utility debuting with a powerful new V6 turbo-diesel engine, a significantly revised chassis and suspension package and extensively updated technology and equipment levels including a huge portrait-oriented central touchscreen.

Though it is yet to announce pricing, payload, towing capacity, engine outputs or dimensions of the load area and cabin, Ford Australia has revealed the Ranger will launch locally with five core models – XL, XLS, XLT, Sport (new), and Wildtrak – while the Raptor expected to join later as the model line’s flagship.

The latest model is Ford’s first completely redesigned Ranger since the release of the T6 series in 2011. It is also the first Ford light commercial vehicle to offer the combination of a 3.0-litre V6 turbo-diesel engine and 10-speed automatic transmission, the Power Stroke unit familiar to the American F-150 and to be offered alongside single- and twin-turbo four-cylinder units.

Ford Australia has not yet confirmed output and fuel economy figures for the newly adopted engine, but in other markets it develops 186kW at 3250rpm and 597Nm from 1750rpm. Ford says the engine is likely to be a favourite with customers wanting “more power and torque for towing heavy loads and extreme off-roading”.

“The three-litre turbo-diesel V6 delivers. When you drive a Ranger with the V6 turbo-diesel, it feels like a much bigger truck, and it feels really tough in the sense that it's got endless power and torque, which is exactly what our customers wanted,” said Ford Ranger program manager Pritika Maharaj.

Ford Australia did not reveal output and fuel economy figures for either engine at the Ranger’s reveal, the twin-turbocharged engine expected to develop the same 157kW at 3750rpm and 500Nm from 1750-2000rpm as before.

Transmission choices include an updated 10-speed and six-speed automatic. Both are shift-by-wire and the manual gearbox will be absent from Australia’s Ranger line-up.

“We know our customers push their Rangers to the extreme, so that’s how we test them. We go the extra mile to make sure Ranger will do everything our customers want, over and over again,” Ms Maharaj added.

Visually, the Ranger closely emulates the styling of its American cousin, the F-150. Ford said it “spent a lot of time with pick-up owners around the globe” to create a “bold and confident” Ranger that “shares its global truck design DNA”.

A prominent new grille and Ford’s signature C-clamp headlight treatment dominates the front end, while a subtle shoulder line and bolder wheel-arches give the new Ranger a “sure-footed stance”. LED headlights are available while, at the rear, the taillights are designed to complement the Ranger’s frontal graphics.

“Customers told us the Ranger needs to look tough and needs to inspire confidence. They were very clear in what Ranger should be, both in the way it looks and the way it makes them feel,” said Ford Ranger chief designer Max Tran.

Beneath the new body is an upgraded chassis riding on a wheelbase 50mm longer and a track 50mm wider than the outgoing model. A hydro-formed front-end structure creates more space in the engine bay for the new V6 engine and helps future-proof the Ranger for other propulsion technologies, Ford hinting that hybridisation or even electrification of the Ranger is possible in the future.

The new front-end design ensures improved engine cooling for the Ranger’s turbo-diesel trio, Ford saying the larger aperture ensures running temperatures remain low when off-roading, hauling, and towing, or in any of the myriad scenarios for which the vehicle is used across the globe.

“With Ranger, we’ve had a big extended family for decades. This truck has always been a trusted partner to small business owners, farmers, families, adventurers, commercial fleets, and so many more in over 180 markets around the world,” said Ford president and CEO Jim Farley.

“And with the new Ranger, this is our moment to deliver. Not just a product our customers will love, but an always-on experience that will help us build strong and lasting relationships with them. This is the midsize truck people will want to own and experience.”

The next-generation Ranger project was led by Ford’s Product Development Centre in Australia. Its 2000-strong team of internationally sourced designers and engineers worked with teams around the globe to ensure the new Ranger met “Ford’s toughest standards”. 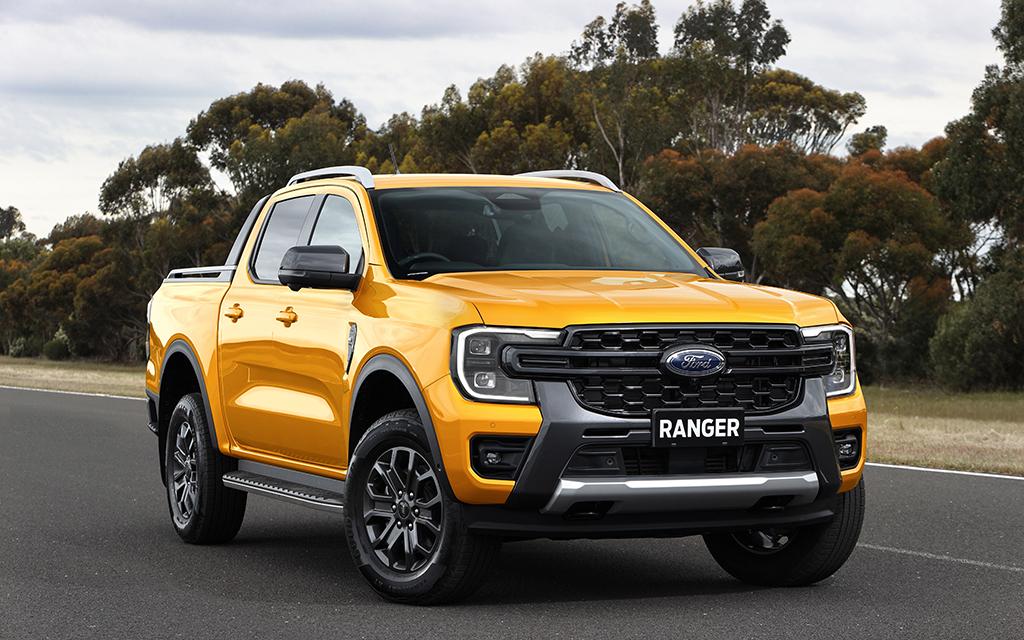 Compared to the outgoing model, the front wheels of the new Ranger are located further forward (+50mm) to offer an improved approach angle and further outboard (+50mm) to increase off-road articulation.

The rear shock absorbers are relocated outboard of the frame rails to improve ride quality over all surfaces and when fully laden, while the availability of two four-wheel drive systems and prominent dual recovery hooks in the front bumper ensure off-road duties are properly catered to.

“Our team was focused on one goal – to make this Ranger the toughest and most capable we’ve ever created. They put it through one of the most exhaustive global testing schedules we’ve ever developed and would not rest until we were satisfied that it was Built Ford Tough,” said Ford Ranger vehicle program director Graham Pearson.

“We have a really wide spectrum of customers. On one end, you might have small business owners looking for very work-oriented transportation. They want traditional two-wheel drive with a single cab and a load box to transport their goods. At the extreme other end, you have the serious off-roaders who really push their Rangers to the limit with endurance races like King of the Hammers or the Dakar Rally.

“The next-generation Ranger will meet the needs of both types of customers and everyone in between … we’ve increased the tuning range to give our customers the best of both worlds – think of this as Built Ford Tough Plus – so you’ve got the capability, toughness and durability that Ford trucks are known for, plus comfort and a more car-like ride that Ranger is known for.”

The ARB accessories collaboration will initially be rolling out in select markets, Australia understood to be “top of the list”.

The load box of the new Ranger has also undergone a significant redesign, an integrated side-step behind the rear tyres providing improved access to the wider tray bed, which now incorporates a standard plastic tub-liner, range of fit-and-stay load securing features, and additional tie-down points.

Its tailgate has been designed to serve as a mobile workbench with clamp pockets to measure, grip, and cut building materials, the area lit by LEDs beneath the left- and right-hand rails – joining additional external lighting to create a 360-degree field of illumination around the vehicle.

“When we met with our customers and observed how they climbed up to the load box, we saw a big improvement opportunity. There were people stepping on the tyre and then going over the side of the truck or hoisting themselves onto the open tailgate,” said Ford Ranger vehicle engineering manager Anthony Hall.

“Widening the truck by 50mm may not seem like a lot, but it makes a huge difference, especially in the cargo box. It means that customers will be able to load flat some pretty fundamental items, such as a sheet of building plywood or a full-size pallet.”

Many of the centre stack’s hard buttons have been removed, with functions incorporated into the touchscreen, a dedicated off-road mode now providing driveline, steering angle, vehicle pitch and roll angles and other controls for four-wheel drive enthusiasts.

The Ranger is also available with a 360-degree camera, and the ability to allow owners to start their vehicle, check various functions, and lock and unlock from their mobile phone via the FordPass Connect app.

“We know our customers are looking for a smart and functional interior space that feels comfortable. So, we set about designing it with a high level of well-integrated technology, clever functional storage, and visual cues so the environment feels comfortable and spacious,” said Mr Tran.

“You’ll find the interior plush but with the dual purpose of work and play in mind. The new short-throw e-shifter is central to the layout and is another example of where customers really guided our decision making. Customers overwhelmingly liked the e-shifter – they liked the fact it looked higher-tech and that it was intuitive to use,” he said.

It’s understood the Ranger will be joined “later” by a new Everest SUV – its twin-under-the-skin Volkswagen Amarok also due sometime next year.

The fifth-generation Ranger will be built at Ford’s manufacturing plants in Thailand and South Africa from 2022. Local specifications and pricing will be announced closer to launch.

The Road to Recovery podcast series