Most smart displays are designed to sit in one place, like on a desk or a shelf, and stay there when you use them. Facebook’s Portal Go takes a different approach—with a rechargeable battery and a convenient handle, it's easy to move around your home. It packs tons of videoconferencing and media playback features, as well as a surprisingly robust web browser. It’s not without its share of quirks though, with a strange mix of standalone and website-based apps and a harsh, uneven audio balance, not to mention Facebook's own questionable company ethos. At $199, the Portal Go is only slightly more expensive than the standard Portal ($179), but significantly pricier than the Editors' Choice-winning Amazon Echo Show 8 ($129.99). Still, it's one of the few smart display that's easily portable, helping it stand out from the pack.

The Portal Go is large for a smart display, measuring 10 inches wide and 7.7 inches high. It looks and feels much more like the Echo Show 5 and 8 than the standard Portal, with a triangular design and a light gray, fabric-wrapped body. The front angles slightly upward; it features a 10-inch screen with 1,280-by-800-pixel resolution and a 12MP camera with a sliding cover. The top edge has a mic mute button as well as small rubber volume up and down buttons inlaid on the fabric.

Two aspects of the Portal Go, in particular, signify its portability. First, a large handle cutout sits just behind its top edge. Second, the display lacks a physical connector for a power cable or any other wired connection. Instead, you connect the display to the charging base via a small, circular recess on the bottom that has three pins. This connection type makes it easy for you to simply pick the Portal up from its dock at any time.

I use the terms "base” and “dock” very loosely here, because the charger is a small white puck about the size of a silver dollar pancake. The bottom is rubberized to keep it in place on a desk or table, but because it’s so small and not magnetic, you may need to blindly wiggle the Portal around before it sits properly.

According to Facebook, the Portal Go’s battery can last up to five hours for video calls and 14 hours for audio playback. While the device is suitable for moving between rooms, its dependence on Wi-Fi means it's not very useful on the go. It also has no IP rating, so don’t get it wet.

While you can set the Portal Go up with Amazon's Alexa voice assistant to control your smart home devices, it's more than just a third-party Echo Show. On the contrary, it's a surprisingly full-featured communication and media device that takes advantage of its large touch screen far more than any other smart display we’ve tested. Tapping the screen to wake the Portal out of its ambient mode brings up a full control panel that includes a row of your favorite Facebook contacts (for quick audio or video calls and messages), along with three of the apps you use the most. You can access the apps by tapping on their icons and they function discreetly within the device’s system; in other words, you don't need to worry about relying on first-party integrations.

Nearly two dozen apps are available on the Portal Go, including music streaming services such as Deezer, iHeartRadio, Pandora, Spotify, and Tidal; video content providers such as CBS News, Food Network, Newsy, Red Bull TV, and most intriguingly, Plex (for those who run a local media server); and video conferencing tools such as GoToMeeting, Webex, and Zoom. 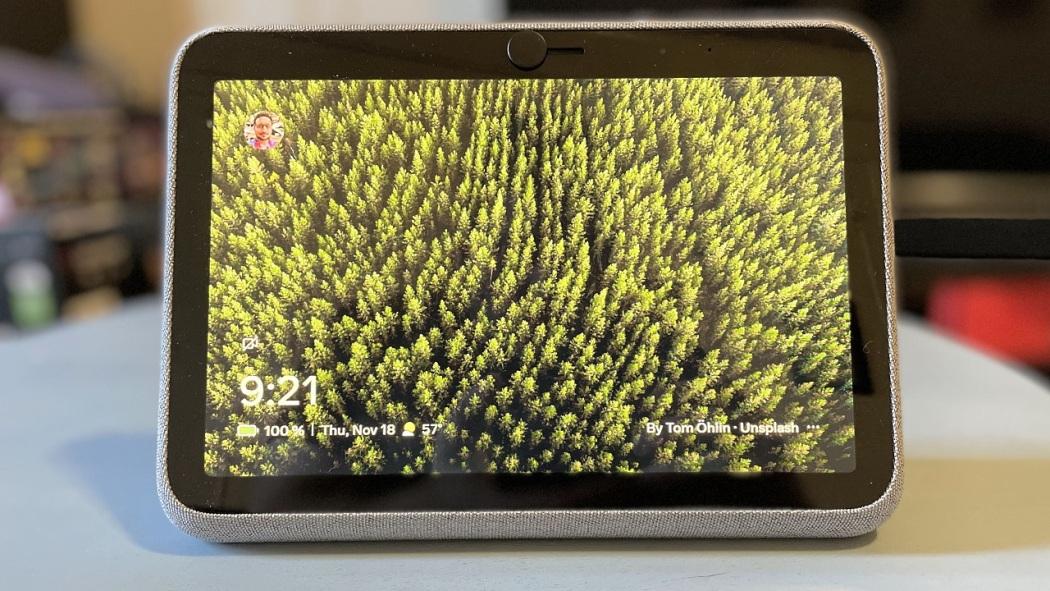 Those are just the dedicated apps; the Portal Go also has a web browser that can load other sites, including media services. The small apps library suggests a few sites, such as Twitch, Wikipedia, and YouTube, but you can pin any site you want for quick access or simply bookmark it.

The browser is robust and I had no problem loading HBO Max through it. That said, these site-apps rely on the mobile or desktop sites of each service, so they aren’t nearly as user-friendly as the dedicated apps and often have uncomfortably small text. And, while the browser is very good at loading different sites, pinch-to-zoom doesn’t seem to work on certain media services such as YouTube. The icons for the sites you pin also use the page’s browser badge, which is much smaller than the large, tile-filling icons of dedicated apps.

Even more oddly, the Portal Go doesn’t integrate your Facebook feed into its interface or even offer dedicated Facebook and Instagram apps. There’s a Facebook Live app for live streaming, but you need to use a site-app to access Facebook and sign in separately to your account, even though you use those same credentials to log into the Portal Go itself. The fact that the Portal Go has a dedicated Plex app (which works quite well), but requires you to bookmark website versions of Facebook, Instagram, Netflix, and YouTube is baffling. Clunky workarounds are better than no workarounds, though, and the Portal Go’s browser's ability to properly load all of these sites and play media from them is genuinely impressive.

One of the biggest appeals of Portal devices is their powerful video calling capabilities. The Portal Go can make video calls through Facebook Messenger, WhatsApp, and Zoom, plus it lets you participate in video conferences on BlueJeans, Facebook Workplace, GoToMeeting, and WebEx. The wide support for professional videoconferencing platforms helps take the sting away from the lack of Google Meet or Skype.

The 12MP camera can digitally pan and zoom in on you as you move through the frame. This feature impressed us when the Portal first launched, but Amazon has since caught up to the technology with the Echo Show 8's digital auto-framing and the Echo Show 10's mechanical pivoting. It’s still a useful capability, but it’s no longer unique to the Portal.

The camera performed well in testing. It offers a wide, 125-degree field of view, natural-looking colors, and sharp picture quality. Just make sure to position the Portal Go on the far edge of your desk, as its upward angle and wide field of view can result in some unflattering shots when you’re right on top of it.

Audio quality for calls on the Portal Go is also good; the speaker is satisfyingly loud and the microphone array ensures that your voice is easy to understand.

While the Portal Go has no wired connections, it sports dual 5W drivers and a 20W woofer. As mentioned, it offers several built-in music apps, plus you can play music to it from your phone via Bluetooth. Don’t expect a lot of power, though; despite its specs, the Portal Go’s emphasis is clearly on video calling. It can put out enough sound to enjoy from a desk, but it won’t fill a large room or power a party.

This limitation seems to be due more to aggressive digital signal processing (DSP) than the drivers, and is especially apparent on bass-heavy tracks. Our bass test track, The Knife’s “Silent Shout,” comes through clearly on the Portal Go, without a hint of distortion in the bass synth or kick drum even at maximum volumes. That seems to be from the device tamping down on overall volume to avoid distortion; while you won't hear any crackle, you also won’t feel any thump.

The DSP is much less overbearing on tracks with less deep sub-bass, like Yes’ “Roundabout.” The acoustic guitar plucks in the opening of the track sound full of resonance, with a strong low-mid response. A bit of string texture comes through, but there isn’t a great deal of higher-frequency crispness. When the track properly kicks in, the bassline stands in the front of the mix, leaving just enough space for the vocals to come through, but it obscures the guitar strums. The Portal Go clearly favors a low-mids balance.

That said, the DSP comes back into play with The Crystal Method’s “Born Too Slow,” where the backbeat that should ominously drive the track is cut back a fair bit. It leaves much more room for the higher frequencies than with “Roundabout;” the vocals and guitar riffs cut through the mix and sound overly harsh. Again, the Portal Go’s sound signature changes dramatically depending on just how low in the frequency range a given track tries to go.

Underneath all of the Portal Go’s technical strengths and weaknesses, there’s still the matter of it being a Facebook (pardon me, Meta) device. This certainly raises privacy concerns considering the company’s spotty record in the past, which possibly contributed to its recent rebranding. You can disable the camera and microphone with a button, while a sliding cover can physically cover the camera. These two options address direct worries about the device potentially spying on you. Like all things Facebook, however, you should still dig into your account settings and scrub down any and all options that involve storing or sharing your information.

Other elements of Facebook you might find unsavory, like how it potentially facilitates the spread of extremist propaganda, pose further quandaries. Whether the company’s ability to enable communication with your friends and loved ones justifies participating in feeding a media engine that can be seen as harmful is a personal call.

The Facebook Portal Go is one of the few smart displays that takes full advantage of its touch screen, allowing it to capably serve as a communications and media device. Its room-to-room portability is another appealing aspect, as it enables you to make video calls from anywhere in your home. It’s far from perfect, though, with less-than-impressive music performance and some baffling software limitations. If you use Facebook Messenger to keep in touch with people over voice and video calls, like the idea of a smart display you can move around, and/or consider robust enterprise videoconferencing support a must-have feature, the Portal Go is a solid choice. If portability isn’t a deciding factor, the standard Portal costs $20 less and sports a more photo-frame-like design. And if you aren’t committed to Facebook's platform, the Amazon Echo Show 8 is much more affordable, sounds quite good for its size, and supports Skype.

The Facebook Portal Go is a unique smart display with a built-in battery and a handle so you can easily move it from room to room, but it also comes with some surprising limitations.