Invasive species can impart devastating effects when the indigenous species haven’t evolved the proper defenses. Two Beetles stowed away on a ship bound for the US in 1949. There wasn’t anything remarkable about them that would suggest their future impact on revolutionizing the largest automobile market in the world. But like a pair of termites, they multiplied and steadily chewed their way through the framework of an industry that thought itself invincible. Eventually, the Bugs got forced out by other small foreign critters, but when the hollowed-out Fortress Detroit finally crashed into smithereens, the Beetles’ teeth marks could be seen everywhere.

GIs who had been exposed to the quirks and pleasures of European cars during WW II developed an appetite for exotic automotive pets. A free-for-all import market boomed during the early fifties. Everything on the automotive menu from Abarth to Zundapp was on offer. VW was just another obscure brand amongst dozens fighting for its share of the world’s biggest market. It was not totally unlike the Chinese market of recent times.

But a turning point came in 1955. It suddenly became painfully obvious to many early import buyers that while three and four year-old VW’s were still happily putting along, their DKWs, Hillmans, Simcas, Lloyds and dozens of other exotic foreigners were dying. Or at least the functional equivalent: sitting for weeks in their fly-by-night dealers’ one-bay garages awaiting parts supposedly on a tramp freighter somewhere in the Atlantic. The VW design was already almost twenty years old, and well de-bugged in the fields of combat. Material and build quality were superb. A sudden and immediate VW tidal shift was underway.

American are faddists, and sometimes our enthusiasm for a new group-identify slips all the way into cultism. Mid-fifties Beetle drivers waved religiously to each other. That degree of auto-reinforcement has happened twice since: the early days of the Honda Civic and the Prius. Civic drivers still waved; early Prius adopters just subtly smirked.

Like many cultists, pioneering VW adopters blissfully ignored all the shortcomings: no trunk to speak of, a cramped back seat, tippy handling at the limit, and as much power on tap as heat on a cold morning. But subtle annual improvements was all it took to keep them smiling and waving. Here’s a vintage ad explaining just how one of them came into being: (YouTube).

Behind that cheerful veneer of fadism was a solid wall of practicality. There was no cheaper way to drive, given the Beetle’s thrift, reliability, durability and resale. Demand suddenly exploded in 1955, and VW struggled to keep up. 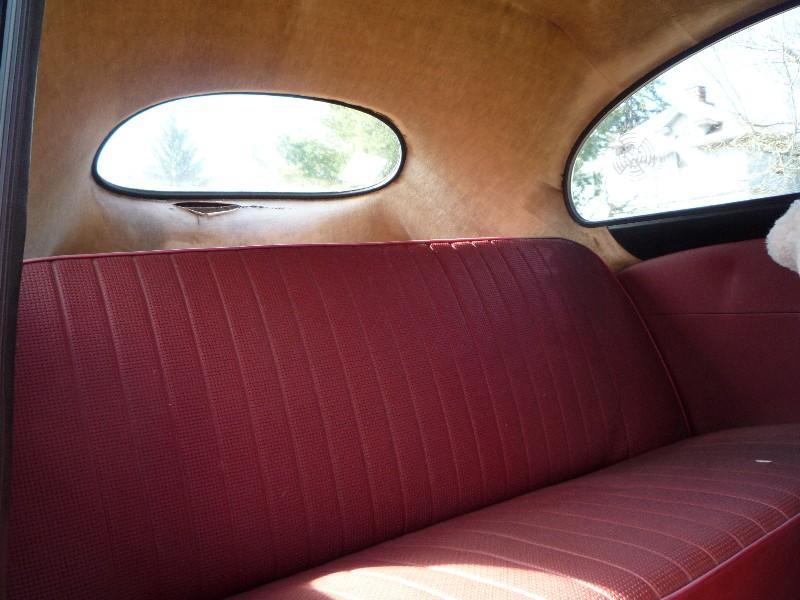 But Volkswagen had a plan. Their ads were lying; they were thinking very big, not small. Because demand suddenly far outstripped supply, VW coerced (“you vill do it ziss way”) dealers to do three key things if they wanted to see any more cars: sell the little buggers at full price, invest in state of the art showrooms and facilities, and hire competent staff. A no-haggle price and a nice dealership experience: sound familiar? Not to Americans at the time. Most of the dealers complied happily, all the way to the bank. The rest became Renault dealers. The VW gold rush was underway.

VW offered Americans the total non-Detroit experience, from the first step into the new, clean dealership. Pleasant, knowledgeable sales reps awaited (your check). No negotiating. Well-trained mechanics. Full parts inventory. It was a highly profitable, well run enterprise. OR ELSE! And one that Toyota was taking careful notes on as it shipped its first pair of Toyopests abroad.

But the driving experience was most un-Detroit of all. Thirty six (30 net) horsepower, about the same as a well-fed riding mower today, engendered patience. What it delivered, it did so rock-steady: Thirty-two miles per gallon, always. Top speed: sixty-eight, exactly. If that was down a mile or two, on level ground, you knew it was time for a tune-up. And it would happily run wide-open at sixty-eight for a good 100k miles straight. And then you swapped in a rebuilt engine – in forty-five minutes.

VW sales increased like the national debt: by the mid sixties, a half million a year were being snapped up at full MSRP. We were making Germany the envy of the rest of Europe, and shattering Detroit’s hegemony of the market. That story has been told on these pages all to well. The real threat to the US in the fifties wasn’t Communism; it was the industrious little Bugs munching away in the walls of our biggest industry.

Have we given due credit to the Beetles revolutionary ways? And can we spend the little time remaining indulging in deep-rooted VW nostalgia? Thanks.

The small-window Beetles hold a very special place from my pre-earliest days. Old-timers here may remember that my auto-biographical journey began here with these words “My first memories are of the womb…” Well, who says you can’t crawl back into the womb? I just did, in this lovely ’57 small-window sedan. It was wonderful too; just as I remembered, if perhaps a bit more cramped. But that round enveloping familiarity and sense of security was still intact. My surrogate mother, the car.

I hadn’t sat, or curled up in the fetal position in an old VW for way too long. But having spent years behind the wheel of several of them, it was all so familiar. The narrow but tall body fits my physiognomy just fine, sitting up in the front anyway. The smaller ’57 windshield means a little more neck craning for lights. But everything else was just as I remembered.

The VW Beetle changed me forever. I think small. I appreciate a well-built and efficient machine. I don’t like to waste money on expensive things that depreciate quickly. And it seems like more and more Americans are thinking along the same lines. Is the VW’s revolutionary influence still at work?