Sometimes it doesn't matter how vigilant you are online. You may already have antivirus or anti-malware software installed on your computer and other devices, and yet you may still be worried that some cyber attacks can sneak in the back door.

So, the real question here is if you have an antivirus, is it possible that malware could fly under its radar and still infect your PC? The short answer is 'yes', but there are lots of caveats to chew over, and it really isn’t likely to happen.

Let’s discuss all the ins-and-outs of this topic, as well as how best to defend your device from malware and absolutely minimize the chance of your system being struck down by a dangerous infection.

First things first...if you aren't already running some kind of protection, then it really is better to be safe than sorry in this respect (even if it’s just the built-in Microsoft Defender for those on Windows, which is actually a serviceable choice these days).

When you have an antivirus or security suite operational on your device, it sits there monitoring your system with real-time protection (as well as providing on-demand scans as needed). We won’t go into exactly how antivirus works here, but the gist is that the real-time malware shield is key, watching over any processes that start on your PC and new files which are introduced, looking for anything suspect. 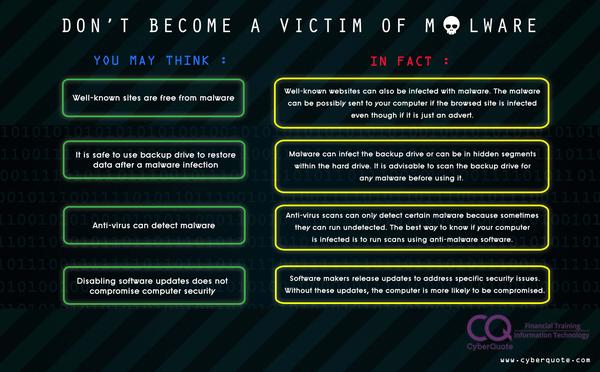 The software uses a library of regularly updated ‘definitions’ (virus signatures) to detect known malware, blocking and dealing with any threat as it’s found. Because brand-new malware won’t be in virus definitions – at least not for a short period of time after it’s introduced to the wild, before it’s spotted and identified – antivirus engines also use heuristics. This is technology which monitors for suspiciousmalware-like behavior, aiming to catch an absolutely new threat (not in the definitions library) just by the way it operates.

Using these methods, an antivirus should keep your system free of any malware, but even given the presence of these multiple layers of defensive countermeasures, is there a chance that something malicious could still slip through the net? There is, although it’s likely – indeed, it should be – only a very, very, slim chance, and there are certainly ways you can minimize the odds of a threat getting a foothold in your device. So, let’s discuss that next.

Getting a high-quality antivirus is crucial

The most obvious protective step you can take is to ensure you’re using not just any old antivirus, but a really good antivirus. An application which is highly-rated, like one of our best antivirus software, will have a higher quality engine, better able to pick up any nastiness trying to slip onto your system, and stop it.

It’s as simple as that – get yourself a good app, and remember, you don’t have to pay for a premium version either. There are some great free antivirus products from big-name vendors, and these freebies use the same core defenses as the paid offerings (they just don’t have nearly as many features or extras, which you may or may not benefit from depending on your own personal needs). In short, you don’t need to stump up any cash, or make much effort, to get good protection for your system.

What kind of difference in the odds of malware slipping through undetected are we talking about between the top products, and those bringing up the rear of the antivirus pack? To give you some idea, let’s look at evidence provided by one of the major independent testing labs which evaluate antivirus products on a regular basis.

AV-Comparatives' 2021 real-world protection test found the best products blocked 99.9% of threats aimed at their host system, compared to the lowest-ranked program which blocked 98.7%. The former were compromised just once, whereas the latter app let a threat through 10 times – that’s quite a difference.

So, we can see that with a good product, it’s really very unlikely that malware could evade the attention of the antivirus. But sadly, it’s not impossible – though there are ways you can further shore up your defenses...

What else can be done to defend your system?

You can also choose to employ another line of defense by installing an anti-malware app. It gives you a slightly different and more focused kind of protection than an antivirus – we discuss the differences in more detail in this piece – and if you’re after a suitable safety net, the app which is ranked number one in our best anti-malware roundup, Malwarebytes, is a great choice.

That’s because Malwarebytes offers a high-quality backup malware scanner – which you can have for free, as the freebie version lets you run on-demand scans – and it can happily run alongside an antivirus without any conflicts. By periodically firing up manual scans using an anti-malware like this, you can have an extra pair of eyes, as it were, monitoring your system as a secondary defense.

The other obvious thing to do is to exercise sensible security habits. Be careful where (and how) you surf on the web, stick to reputable sources for software downloads, and be extra cautious around clicking on any links sent to you (even if a link appears to come from a friend or trusted source). Just because you have defenses against malware on your device doesn’t mean you should be careless, because a major part of not getting infected is minimizing any risk, and using your common computing sense.

Even if you do follow all this advice (and we sincerely hope you will), you can never fully rule out the possibility of a malware infection – unless you never go online! So, the other thing to bear firmly in mind here is that there’s a further protective measure which should be undertaken, and that’s a backup strategy. Back up your data – or even your entire system – with dedicated backup software and keep several backups, too (one in the cloud, one local, maybe on an external hard drive, just in case one of those options fails when it comes time to restore your files).

With a secure backup, at least if you are hit by malware and it nukes your data somehow – maybe it’s ransomware that locks all your files away – then at least you have a copy of everything, and can start over again with a new installation of your operating system. This way, you’re only losing time and going through some hassle, rather than losing maybe precious data, irreplaceable photos and so forth.

There’s no avoiding the truth that malware can sneak under the radar, particularly if you’re unlucky enough to run into a very new and sophisticated threat. It’s possible that malware can go undetected, then, but the odds are absolutely minimal if you’re very careful, and first and foremost practice the safe surfing and other good security habits we mentioned.

If you do that, then you’re already very strongly decreasing the odds of encountering anything malicious, therefore making it very much more likely that what little you do come up against in the way of malware will be neutralized by a quality antivirus (which blocks 99.9% of threats), particularly when it’s part of an even stronger two-tier antivirus plus anti-malware strategy, as we discussed above.

Looking at the matter from this perspective, the chance of a malware infection becomes extremely low, but nothing can ever be ruled out completely – so don’t forget that last piece of advice on backups either.