The design is a little more "traditional lamp" in its silhouette now, with IKEA doing away with the plinth-like base of the first-generation lamp. The buttons to control Sonos have been relocated, then, to the rear. It leaves them a little trickier to locate by touch alone, though the volume up and down keys have different dimples to help there.

Rather than the rotary knob to control the lamp on the side – which looked like it was a dimmer, but wasn't – IKEA has replaced that with a small, circular button on the front. The lighting aspect of the Symfonisk table lamp remains entirely separate – and non-smart – from the Sonos side. There's no way to remotely turn it on or off, bar screwing in a smart bulb.

Making things easier if that's the route you take is the change in bulb socket. The first-gen lamp only worked with E12 bulbs, which could be tricky to find. Now, the second-gen relies on E26/E27 bulbs, which are much more available including in "smart" form. With a Hue bulb screwed in, I was able to remotely adjust brightness and color from the Hue app. 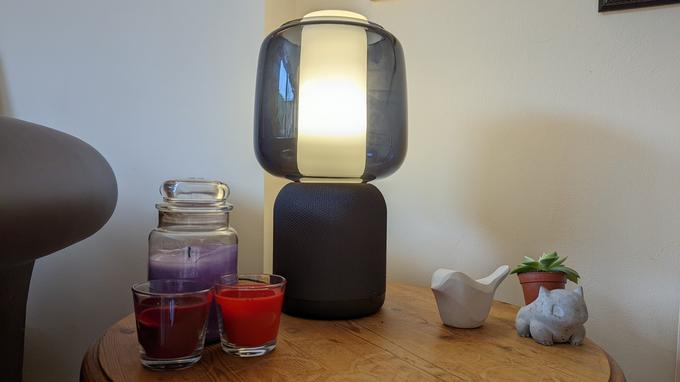 While the $140 bottom half – offered in black or white – resembles an Apple HomePod, the upper half can now be outfitted from a small selection of different shades. A $39 glass version comes in frosted white or the dark-tinted clear you see here; both have a narrow white inner tube. Alternatively, there's a $29 barrel-like fabric shade, again in white or black, both with a wider, white inner tube.

They all look more lamp-like, and the proportions are a little less odd than with the original Symfonisk lamp, but there's still no provision to use your own shade. That remains a missed opportunity. IKEA is selling base and shade separately – they come in different boxes – so there's always the possibility of alternative shades being launched in future. There's been no actual commitment to that, however.

Setup is, like any Sonos speaker, done through the Sonos app. You can group the lamp with existing Sonos speakers, wirelessly link two together as a stereo pair, and then use that pair as rear surround channels with a Sonos speaker bar like the Beam Gen 2 or Arc. There's also Trueplay support, which tunes the speaker's EQ settings according to the acoustic conditions of the room it's in. It's worth doing, as it made a noticeable difference to how full the Symfonisk sounded.

Helping there, too, is the new internal design. Despite how the original Symfonisk table lamp may have looked, the drivers inside were still directional. This time around, there's a new waveguide to improve the spread of audio around a space.

The result isn't quite a 360-degree experience – step right behind the speaker and things get a little muffled, comparatively – but it's definitely a more room-filling sound than before. There's also more bass and, generally, the whole thing feels closer to its natural Sonos counterpart, the lampless Sonos One. The latter can still crank higher, mind, while the Symfonisk gets a little muddier in the very upper limits of its volume range.

As well as accessing streaming services like Spotify, Apple Music, and Sonos Radio through the Sonos app, there's also AirPlay 2 support. Many third-party apps, like Spotify, can also control Sonos speakers as well, but there's no Bluetooth for direct pairing with a phone.