Jayson Tatum scored 32 points while Jaylen Brown added 30, helping the Boston Celtics cruise to a 126-97 blowout win over the Sacramento Kings at the Golden 1 Center.

Domantas Sabonis had a team-high 30 points for the shorthanded Kings who were without De’Aaron Fox (hand) for the matchup. Without their star point guard, they struggled to keep pace with Boston, falling behind by 19 points at halftime and failing to cut that deficit below nine points in the second half.

Boston improved to 2-0 on their four-game road trip with a tough matchup looming in Denver on Sunday. 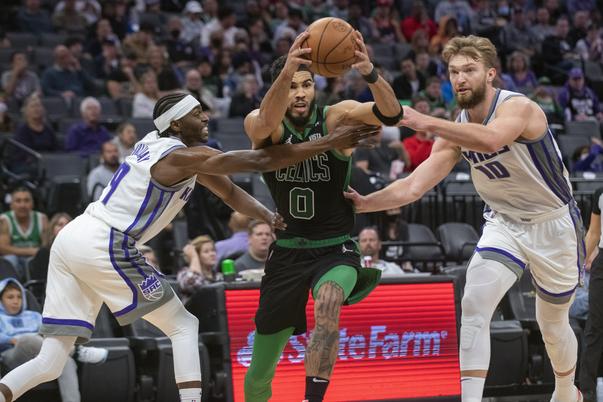 Here are four takeaways from Friday’s win for Boston:

The Jays take turns building a big lead in the first half:Boston’s young duo put on a show against an overmatched Kings squad in the first half with their scoring prowess. Jaylen Brown led the way in the opening 12 minutes, scoring16 points on 7-of-10 shooting to help Boston build an early six-point lead. Jayson Tatum took the baton from there, shining with Boston’s second unit to score 17 of his 22 first half points in the second quarter. He was lights out from the field, going 8-of-10 overall and 6-of-7 from 3-point range against a Sacramento defense that struggled with covering him out of switches and the pick-and-roll. By the time intermission hit, Brown and Tatum also outscored the Kings by themselves in the opening 24 minutes, combining for 42 points on 17/23 FG, and 7/9 shooting from beyond the arc as the visitors built a commanding 19-point lead. That advantage was all the more impressive given the fact the Kings shot 50 percent from 3-point range in the first half and still couldn’t keep pace with Boston’s firepower.

Celtics offense in a special groove:Boston has relied on their defense all season long but the noticeable gains in their offensive efficiency were on display against Sacramento. The Celtics shot a red-hot 64.3 percent from the field in the first half and 57.9 percent from 3-point range, scoring in a host of easy ways from all parts of the floor. The team’s ball movement continues to be exceptional after piling up 19 assists in the first half alone but the high quality of open looks are speaking volumes about the team’s execution right now. Boston scored 22 points in the paint in the first half but once the Kings turned to a zone defense, they punished them from the perimeter, knocking down 11-of-19 attempts from 3 before intermission to turn the game into a blowout before intermission even hit. That type of production is the reason why Boston continues to shoot up the East standings.

Wise minutes management begins for Ime Udoka:With a busy stretch of basketball awaiting Boston with three games in four nights beginning in Sacramento on Friday, the head coach made notable efforts to lessen the load for several players. Al Horford and Rob Williams have dealt with a heavier minutes load all year long due to an undermanned big rotation before the trade of Daniel Theis. However, Udoka has started to make a concerted effort to keep the minutes down for that starting duo in order to help them stay fresh for a looming postseason run. Williams and Horford played just 13 minutes each in the first half, far below their season averages as Udoka leaned heavily into using a nine-man rotation for the second straight game on this road trip. Strong play from Boston’s second unit should help Udoka continue this strategy during the home stretch of the regular season without hurting Boston’s chances of rising up the standings in the Eastern Conference. Horford, Williams and Marcus Smart all did not play in the fourth quarter, helping keep all their minutes down.

Derrick White’s shooting woes continue:The midseason addition missed 16 consecutive shots at one point on Friday night, dating back to the Celtics’ loss to the Mavericks last Wednesday. He finally broke out of that streak with a fast break dunk midway through the third quarter but his scoring woes continue to loom as a worrisome spot amid Boston’s recent stellar play. White missed six of his eight shots in the matchup and is now just 4-of-26 from the field over his last three games. He did make a 3-point shot in the fourth quarter to snap a 0-of-13 drought from beyond the arc but his struggles from beyond the arc in Boston (22 percent) remain a concern heading into the stretch run.