Mozilla released Firefox 98.0.1 on March 14, 2022. It is a minor release that comes a week after Firefox 98. Firefox 98.0.1 removes the search providers Yandex and Mail.ru from the web browser in select regions.

When Mozilla released Firefox 98, it did hint at the removal of search engine providers in Firefox, but did not mention any by name or provide more details other than that it did not "receive formal permission" to integrate the unmentioned search engines in Firefox.

Yandex and Mail.ru have been removed as optional search providers in the drop-down search menu in Firefox. 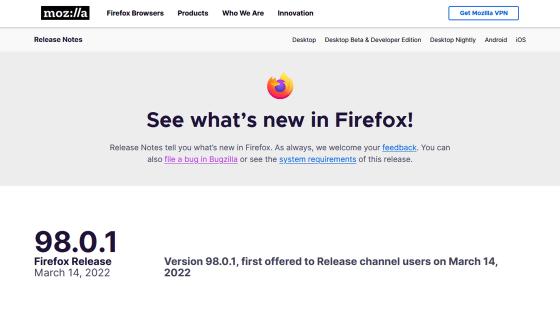 Mozilla replaced the search engine, if it has been the default, with Google Search. The Google Search queries use the Firefox tag by default.

Mozilla points out further that the search engines have also been removed from custom versions of Firefox that partners may have distributed in select regions.

If you previously installed a customized version of Firefox with Yandex or Mail.ru, offered through partner distribution channels, this release removes those customizations, including add-ons and default bookmarks. Where applicable, your browser will revert back to default settings, as offered by Mozilla. All other releases of Firefox remain unaffected by the change.

No explanation is provided for the change in the release notes. Firefox users may add the removed search engines back to the browser. One of the easier ways of doing so is the following:

The search engine has been added to Firefox and you may make it the default or use it occasionally only. Search providers are managed by loading about:preferences#search in the Firefox address bar.

Details are still unclear. What sort of agreement did Mozilla want search providers to sign for inclusion in Firefox? Firefox users who are affected by this may add the search engines back to the browser.

Now You: what is your take on all of this?