Love it or loathe it, Facebook (sorry, Meta to use the brand’s new moniker) just won’t quit makingsmart displays.

The Facebook Portal range of video-calling devices is making an assault on a difficult market due to the popularity of Amazon’s Echo Show and Google’s Nest line of smart speakers with built-in screens, while at the same time carrying Facebook’s difficult history when it comes to privacy concerns.

While Google doesn’t offer a smart display with a screen larger than 10 inches, Amazon’s nearest rival is the Echo Show 15, which unsurprisingly has a 15-inch display. The Show 15 is also slightly more affordable, costing $249 / £239.99 / AU$399

You might think these two are similar due to the size of the screen, but in actual fact, the Echo Show 15 is initially designed to be a wall-mounted device, although it can be used free-standing if you purchase the additional stand for $29.99 / £29.99 / AU$49.99 - although in total it’s still cheaper than the Portal Plus. The Portal Plus, meanwhile, can’t be mounted to the wall at all.

The display on the Portal Plus can also be tilted to ensure it’s at the optimum angle to be seen.

Both smart displays are wrapped in a muted grey mesh fabric that will complement any home decor. Given the larger screen, it’s no surprise the Facebook Portal Plus has a slightly bigger footprint than the Portal Go, measuring 9.87 x 12.31 x 3.86 inches compared to the Go’s more compact size of 10.1 x 6.84 x 3.1 inches. 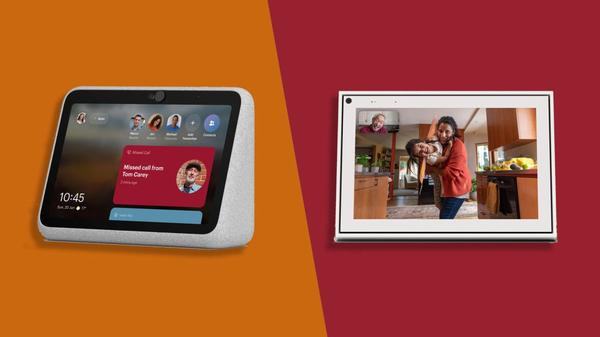 The Portal Plus is mains-powered, and as well as the power socket also features a USB-C port on the back designed for charging your smartphone. However, the Portal Go is battery-powered - on the base sits an insert for the charging dock, so the smart display remains stable when it's being charged - although there’s nothing to stop you leaving it on this dock the whole time, so it’s always fully charged when you do want to move it around. There's also an integrated handle on the back, which makes it easy to move between rooms.

The two smart displays have the same 12MP camera for video calls, although the Portal Plus has a slightly wider field of view at 131 degrees, compared to the Portal Go’s 125 degree field of view. Both smart displays also boast the same audio set-up, with two 5W full-range speakers and 20W woofer, along with a four-mic array to ensure your voice is picked up clearly when you're on a call.

When it comes to the most basic tasks you’d use a smart display for, both Portal devices are evenly matched. Each allows you to make video calls using Facebook Messenger and WhatsApp as well as conferencing apps such as Zoom, WebEx, and GoTo Meeting.

The cameras are identical and both have the ability to automatically pan and zoom to ensure you’re always in the center of the frame during a video call, even if you get up and move about the room.

On test, we found this feature was extremely smooth when panning and zooming, and we were impressed that for small movements, such as if we shifted in our seat, the camera didn’t attempt to reposition the frame.

As you’d expect, both Portal devices come with access to voice assistants; you’ve got Amazon Alexa, and “Hey Portal” - Facebook’s own offering.

While Alexa can set timers, adjust music playback, and control your smart home devices as well as offering up the latest headlines or sports scores, “Hey Portal'' is more limited. We found it was only able to start video calls, adjust the brightness of the screen, and set timers.

If you’re privacy-conscious, the fact that Facebook records and transcribes anything it hears after the wake word of “Hey Portal” storing it on its servers for three years may not sit well with you. Amazon, on the other hand, offers the ability to delete these recordings instantly from the Alexa app.

For finding information on the web, there’s also a built-in web browser on both smart displays that doubles as a way to watch some video streaming services such as Prime Video and YouTube on the smart display.

However, it isn’t possible to watch Netflix on either Portal. We’ve asked Facebook why this is, but it has yet to elaborate.

Essentially, the only real difference is in the screen size and the resolution, with the Portal Plus being sharper than the Portal Go, and the Portal Go’s ability to be carried from room to room, without needing to be plugged into a power outlet - making moving the unit about during a video call a possibility.That battery will last up to five hours between charges too.

The Portal Go looks a little sleeker than the Portal Plus in our eyes, because the camera is built into the screen creating a flush design. On the Portal plus, the camera unit sits on the top of the thin, delicate screen, somewhat spoiling the minimalist styling.

When it comes to choosing between the Facebook Portal Go and the Facbook Portal Plus, how you plan to use the smart display will affect which model you choose.

If you plan on regularly moving the device between rooms, even when on video calls, or want a device that is more sleek and stylish, you should opt for the Facebook Portal Go. It’s also a better option for those on a budget, as it’s more affordable too.

However, for those that plan to use the smart display solely for video calling and want as big a screen as possible, the Facebook Portal Plus will be a better choice. This smart display is also ideal if you plan to watch a lot of YouTube videos or make a lot of video calls with multiple participants. It would, for example, be well-suited as a second screen purely for calls for those that work from home.