"Architecture created from light. Light as a building material. Non-existent spaces appear out of nowhere, mutate, mix, cut, dialogue and fade away."

Such was the experiential and immersive installation set up by lighting designer Antoni Arola and Spanish light manufacturer Simon for the recently concluded Madrid Design Festival 2022 within the Cultural Centre of Villa Fernán-Gómez in Spain. Fiat Lux.3 Architectures of Light was a youthful melange of visual, design, sound and spiritual sensibilities, approaching imperceptibly, the “intangible”, via a route of light. The project is scenic, architectural and spatial, created as "an immersive proposal to awaken the sense and consciousness, with the desire to make the visitor feel part of an illusion," says Arola, founder of Estudi Antoni Arola based in Barcelona, Spain.

Previously displayed at the Llum Bcn 2020 and Lluèrnia 2021 (Olot) festivals, this was the third time Fiat Lux was presented to an audience, explaining the "3" in the project’s moniker. Fiat Lux is a Latin phrase for “Let there be Light”, from the third verse of the Book of Genesis, outlining the crux of the design installation, which creates architecture from light. The scene comes alive as a combination of concepts threaded together by light and spaces, as an immersive experience where scenography, theatre and installation marry.

The Spanish lighting designer relays that Fiat Lux.3 Architectures of Light was born from an “artistic curiosity” rather than a given brief by the Madrid Design Festival, which is exhibiting this kind of a light installation for the very first time. This led to them building changing spaces where visitors could move around and interact with the space, acclimatise themselves into the magical atmosphere of a fictional, imaginary, otherworldly setting that would enamour people of all ages.

“This set-up is designed to invoke unique sensations and emotions in each visitor and showcase light as a creative element with a great ability to transform. It is a “living” piece that evolves and travels, adapting to different spaces,” elaborates Simon, the head of the industrial Simon Group specialising in technological solutions for lighting design, light control, connectivity, and electrical materials for contract projects (retail, hospitality, workplace), and residential design projects.

“The function is a free journey through space both to contemplate the scenes and to actively interact with the physical elements and volumes that appear and disappear.”

As is evident, light, its organised mutation and pirouetting transformations, form the core of the dreamy lighting installation, that takes to heart, design as an emotion. Light is considered as an “intangible but malleable material”, brought to life with specialised technology, and is guiding seamlessly to build atmospheres through which the audience can interact with it. The said material is choreographed to metamorphose, mix, cut, dialogue and fade away. 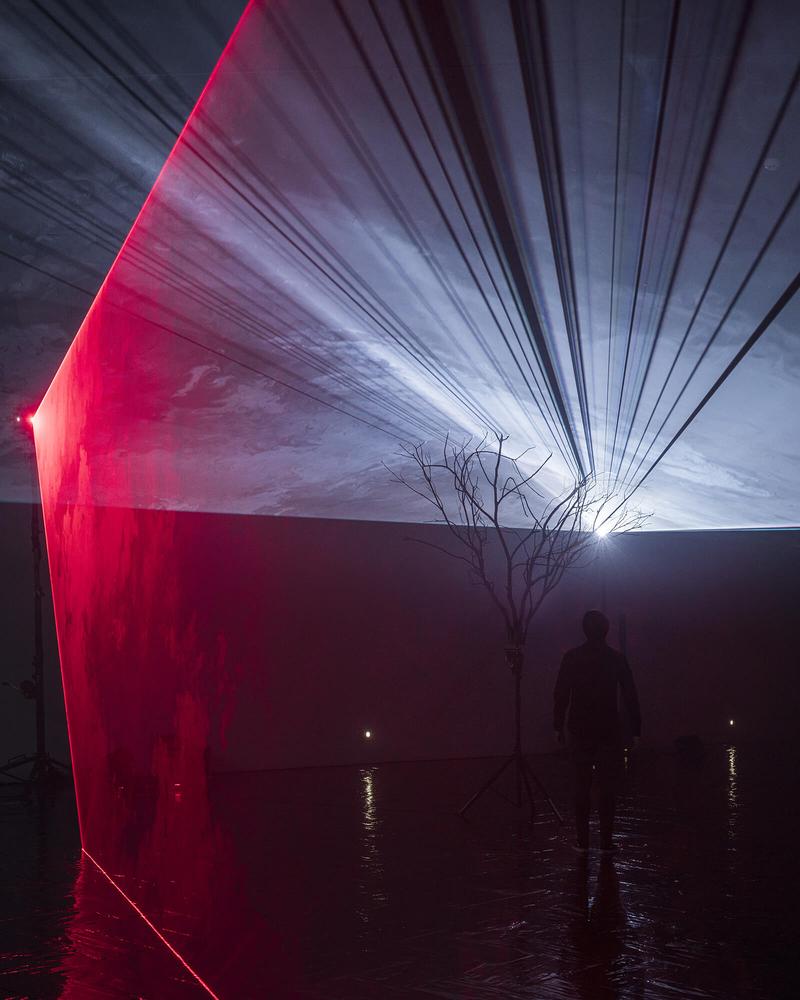 A chromatic balance is achieved with hues of red, blue and orange that bleed into and away from each other to become soft purples, greys and pastels, to contrast mystically with the untouched white and black spaces of the space which attains further character with a soundscape by musical artist Mans O.

The exhibition hall features “non-existent” spaces created by several lasers positioned on lighting stands that form two dimensional planes, essentially becoming walls of light that change and move as massive construction panels whose consistency is interrupted by other objects and visitors. Smoke machines and some physical volumes appear and disappear as part of the exhibit to further the magical ambience, such as lit wooden panels and a short tree fitted to a motorised base that slowly spins and rotates. The latter forms the focal point for the exhibition, its branching rotating. When it comes across the moving planes, strips of light are thrown into the space as another element. Simultaneously, wooden panels suspended from the ceiling cut off these beams of light, as if they are swallowing them whole.

This edition of the Madrid Design Festival (February 15 – March 13, 2022) celebrated its first five years with an extraordinary programme, turning Madrid into the capital of design, outlined by a leitmotif "to change the world by using design as a transformative element. This motto fully reflects Simon’s 100-year history as a specialist in lighting, technology and automation systems for controlling light in every environment," the company shares.

Let there be light: Chandelier designs that enliven your space

Jincy writes and researches content centred on the best of global design and architecture. An architect by training, she enjoys picking the minds of creatives and weaving their ideas and works onto worded tapestries.

Jincy writes and researches content centred on the best of global design and architecture. An architect by training, she enjoys picking the minds of creatives and weaving their ideas and works onto worded tapestries.